Aleje Jerozolimskie in the early 1900's 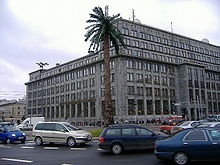 Aleje Jerozolimskie (literally Jerusalem Avenues) is one of the principal streets of the city of Warsaw in Poland. It runs through the City Centre along the East-West axis, linking the western borough of Wola with the bridge on the Vistula River and the borough of Praga on the other side of the river.

The name of the street comes from a small village erected in 1774 by August Sułkowski for the Jewish settlers in Mazovia. The name of the village was Nowa Jerozolima (New Jerusalem), and the road to Warsaw was named Aleja Jerozolimska (singular, as opposed to the modern name, which is plural). Although the village was abandoned shortly after its foundation, and most of the Jews eventually moved to the city itself, the name stuck and is used ever since. It was there that the first railway station in Warsaw was built. In late 19th century the easternmost part of it became one of the most representative—and the most expensive—areas of the ever-growing city. In early 20th century, and especially after Poland regained her independence in 1918, the street was extended westwards, and the borough of Wola eventually incorporated into the city. Most of the houses along the avenue, including priceless examples of art nouveau and modernist architecture, were destroyed in the aftermath of the Warsaw Uprising. After World War II the communist authorities demolished the remaining buildings, and the northern side of the street is currently dominated by the gigantic Palace of Culture and Science and the Warszawa Centralna railway station. The only surviving part of the pre-war architecture is located to the south of the street. Half-way down the street, at the junction with Krucza and Bracka streets, Warsaw's original main post-war department store, CDT 'Smyk' is to be found. 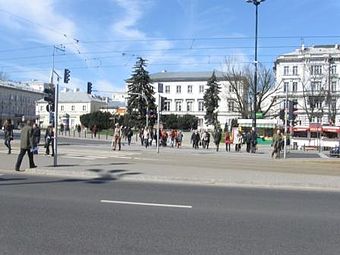