Meconium
For the historical meaning of the term, see Opium. 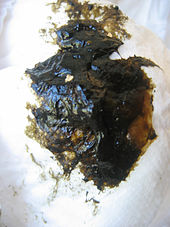 Meconium is the earliest stools of an infant. Unlike later feces, meconium is composed of materials ingested during the time the infant spends in the uterus: intestinal epithelial cells, lanugo, mucus, amniotic fluid, bile, and water. Meconium is almost sterile,[1] unlike later feces, is viscous and sticky like tar, and has no odor. It should be completely passed by the end of the first few days of life, with the stools progressing toward yellow (digested milk). The term Meconium derives from meconium-arion, meaning "opium-like", in reference either to its tarry appearance or to Aristotle's belief that it induces sleep in the fetus.[2]

A symptom of both Hirschsprung's disease and cystic fibrosis is the failure to pass meconium.

Meconium is normally stored in the infant's bowel until after birth, but sometimes it is expelled into the amniotic fluid prior to birth or during labor and delivery. Meconium liquor is recognised by medical staff as a sign of fetal distress, and puts the neonate at risk of meconium aspiration.

Meconium can be tested for various drugs, to check for in utero exposure. Using meconium, a Canadian research group at the Hospital for Sick Children, University of Toronto, showed that by measuring a by-product of alcohol (FAEE) they could objectively detect babies exposed to excessive maternal drinking of alcohol in pregnancy.[3] In the USA, the results of meconium-testing run on a newborn can be turned in to child protective services and other law enforcement agencies.[4]

Most of the time that the amniotic fluid is stained with meconium it will be homogenously distributed throughout the fluid making it brown. This indicates that the fetus passed the meconium some time ago such that sufficient mixing occurred as to establish the homogenous mixture. Terminal meconium occurs when the fetus passes the meconium a short enough time before birth/caesarean section that the amniotic fluid remains clear, but individual clumps of meconium are in the fluid.