North Tacoma, Tacoma, Washington
"North Tacoma" may also refer to the purported toponym of Springfield (The Simpsons)#Location in The Simpsons. 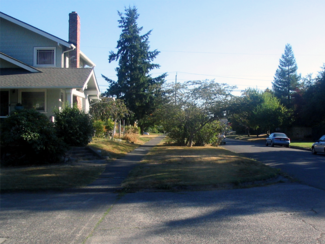 A residential neighborhood of North Tacoma

North Tacoma (also called the North End) is a neighborhood in Tacoma, Washington, in the United States.

The North End of Tacoma has informal and formal boundaries. Informally, the generally accepted boundaries of the North End are 6th Avenue and Division Avenue to the south and Puget Sound to the north, west, and east. Although the independent city of Ruston is not legally a part of the city of Tacoma, most residents of Ruston self-identify as being from Tacoma and it is considered acceptable for someone from Ruston to refer to the area as the "north end." Because Division Avenue does not run down the ridge above it and thus does not cross it, Schuster Parkway lacks a defined border between the north and south ends. However, this area is not populated, and extrapolating Division Avenue gives a good sense of where the area ends. Formally, the city has designations for each of the eight neighborhoods which are represented by neighborhood councils. These designations are not generally known, but they are marked on city streets by special signs. For the North End, 6th Ave forms the boundary on the south and southeast to 4th St., Puget Sound which runs NE to North, 46th St. on the North to Huson, and back down to 6th on the South. While much of the West End and some the Central District (especially the Stadium area) are identified with the informal boundaries of the North End, the City of Tacoma identifies these area as separate for purposes of representation and planning.

The main commercial areas are along 6th Ave and in the Proctor District, both of which convey a sense of a small town within a larger city. The 6th Ave. corridor, which is shared on its South side with the Central District has many fine independent restaurants and trendy hangouts which the Proctor District has a variety of shops, many of which are also independent and which meet many of the shopping needs of North End residents.

Relative to the rest of Tacoma, the north end is wealthier, being solidly middle class. Although the area has a traditional heritage of lower middle class residents such as fisherman, gentrification has resulted in increasing house prices. However, as evidenced by commute time figures from the 2000 Census, most residents of the north end still work in Tacoma. An unusual number of people in the area work in the fields of education, health, social, and human services. The population is also more educated than average, with just short of a quarter possessing a graduate or professional degree. North Tacoma is, behind Northeast Tacoma, the second wealthiest part of the city.

The waterfront, especially around Old Tacoma, is increasingly an expensive place to live, although there are still a few moderately-priced apartments around the Tacoma Narrows Bridge.

North Tacoma votes heavily Democratic on federal, state, and local areas, with all precincts giving sizeable victories to John Kerry in the 2004 Presidential election, Barack Obama in 2008, and U.S. Senator Patty Murray in 2010. North Tacoma -- particularly the area surrounding the University of Puget Sound -- is one of the most Democratic parts of the city.