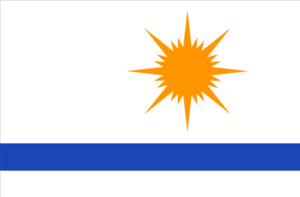 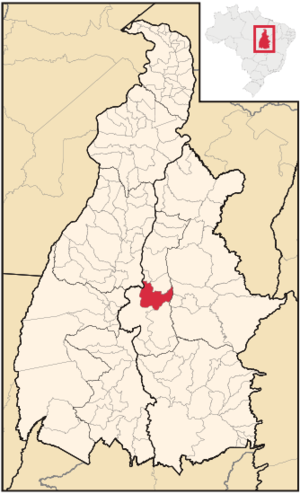 mapsize = 250px
map_caption = Location of Palmas in the 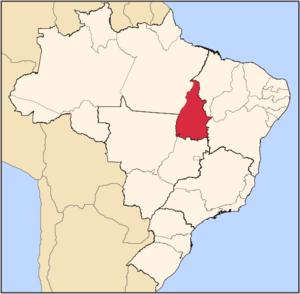 Palmas is located at the state geographic centre. The average altitude is 700 m (2296 ft). The city is located between these s and the river Tocantins. In the east Palmas is bordered by the Serra do Lajeado. The city is clearly investing in s, squares, flower beds and parcs. Palmas at is like an illumination mirage in contrast with the calm shades of the Serra do Carmo slopes. The yearly average temperature variation is between 24°C (75°F) and 28°C (82°F) during the rain season (-March) and 28°C (82°F) and 35°C (95°F) during the dry season (May-September). There is only little to moderate wind. : 76%. Palmas has several parks that offer some refreshment and calmness in the city that can be hot and restless.

Palmas was founded in 1990, with the purpose of being the capital of the newest Brazilian state Tocantins, which was established after the promulgation of the new 1988 Brazilian Constitution. The city has a well-designed road system, and its urban zoning is modelled on that of . It has - for instance- a beautiful symmetrical park in the city centre. In 2002, the Lajeado Hydroelectric Power Plant reservoir was completed, at which point the city gained many es, and also the huge Ponte da Amizade Presidente Fernando Henrique Cardoso, which crosses over 8 kilometers (5 miles) over the reservoir, connecting Palmas with the major highway .

The TO-050 is the north-south at the east of Palmas parallel to the s and the . On the west side of the river is the BR-153 from to , the largest that crosses the state.

The Praça dos Girassóis ( of s) is an urban square in the city's birthplace, where government facilities are based. A new was inaugurated in 2002, 20 km (12.42 mi) from the downtown. Palmas has long and wide s, landscaped areas for parking and rotatory, known as "queijinhos". s and s in Palmas have no names but numbers, similar to . It has the second lowest of the state capitals in , preceded only by Boa Vista (which does however have more inhabitants: 242,179). The rate of Palmas is the highest of the country. Palmas is planned for 2 million inhabitants. [ [http://www.brasilbar.com/palmas/index.html Palmas Tocantins The center of Brasil and a center for entrepreneurs and ecotourists ] ]

The Palmas Airport connects Palmas with many Brazilian cities.

The city is home to the Federal University of Tocantins.

Tocantins forms the boundary between the and the coastal . As a result, the state's geography is varied. Many s cross through the state (including one of the same name), and there are over 20 archaeologically significant sites found in Tocantins.

The area where Palmas was build, was originaly used by several s. Before 1990 the only village on that location was Vila Canela, near the river Tocantins, and near the Graciosa beach. This village and the beach are since 2002 on the bottom of the new . The flat area of Palmas is right between the river and the Serra do Lajeado hills in the east, and the is the typical ''. In 1989, Miracema was the temporary capital of the state. One of the first drawings of the new capital by the architects Luiz Fernando Cruvinel Teixeira e Walfredo de Oliveira Filho. On top the Lajeado hills, at the bottom the beach. As from 20 May 1989 some roads and baracas where build and in 1990 the government could start creating to its dreams from a new location: Palmas. Mr. Campos decided he wanted to start a city with a complete new , based on the experience of other new cities in Brazil. Therefore a new area was looked after. It was decided to take the east side of the river, so the forgotten east side of the state would develop as well. You will often read the location was chosen because it is the geodesic center of .

At the time before the lake, the made some curves, forming the letter S, looking from above. It is said that mister Siquera Campos liked the S, and that added to the choice of the location for Palmas. When the area was chosen in January 1989, Campos decided he wanted the Palacio, the state headquarter, to be build on the highest place in Palmas. Although the s said the hill is to soft to build on, it was build. The temporary Palacinho, said to be the first building in Palmas, still exists not far from the new one. It is kept as a , and since 2002 used as a of Tocantins history.You´ll notice most main crossings in the city are roundabouts. This minimizes the number of traffic lights and indeed you can cross the city very quickly.

The most dynamic areas of commercial activities , , and s. The JK is the main street for shopping, s and s. Palmas has several airconditioned shopping centers.

The largest is Palmas Shopping. An ideal place to cool off, have a or have . Palmas has several river beaches with sand and infrastructure. When the Orla project is finished, Palmas will have 15 km (9 mi) of beach, attracting many .

The facility occupies one of ’s largest airport sites and has privileged location near the Lageado Hydroelectric Station.Designed with a modern concept of visual communication, the new Palmas Airport Complex contains an Aeroshopping area, a program developed by Infraero aiming to turn Brazil’s main airports into true commercial centers with their own brand and identity.The passenger terminal has 12.300 square meters of constructed area and capacity to serve up to 370 thousand people a year. It has a food court, cultural space, s, panoramic deck, elevators and air conditioning. The runway can receive aircraft the size of a Boeing 767. There are three taxiways and aprons for general aviation, making operations more flexible. The airport has full infrastructure that includes a control tower and installations for the Air Navigation Group, fire brigade, a covered equipment parking area, canteen and training rooms, two aircraft fueling stations, a gate with electronic entry control, guard booths. parking and flight protection buildings, besides a 4 km (2.48 mi) access road linking the airport to the Tocantins capital city’s main thoroughfare.

In sports, the most notable club in the city is Palmas FR, which plays at Nilton Santos .