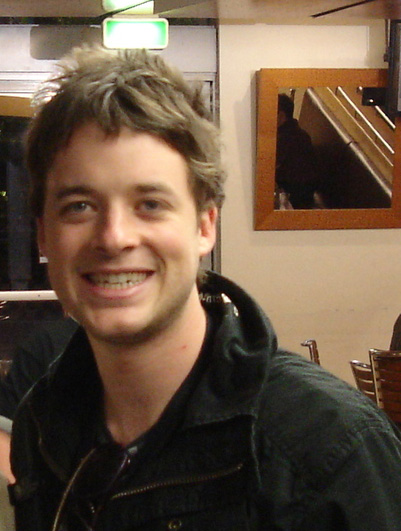 Hamish Blake (born 11 December 1981) is an Australian from , Victoria. Since 2003, he has frequently worked with Andy Lee as part of the . The pair have performed live and on television and radio, most notably with their popular drive-time radio program "Hamish & Andy". As a solo performer, Blake has also appeared on various Australian television programs, including the 's televised 2008 Great Debate. He has been a regular guest on "Spicks and Specks" and "".

Hamish Blake grew up in the Victorian suburb of . He is a middle child; his older brother, Lachlan, is a solicitor and his sister, Sophie, has completed an arts degree. His parents, Noel and Kerry, separated when Blake was 17, with his father eventually remarrying. As a child, Blake says he was a fan of British comedy such as "", "" and ""; as a teenager he "worshipped" comedians Tony Martin and . He attended school at St Leonard's College, graduating in 1999 in the top 1.1 per cent of the state.

After a gap year, Blake enrolled at the in a Science/Commerce double degree. "I'm interested in artificial intelligence and computer science. That stuff still fascinates me." He says. However, a few weeks into the semester he met Andy Lee: "That was the turning point. The wheels quickly fell off my academic career." Blake eventually dropped out of university to pursue a career in comedy alongside Lee. Blake's first experience with comedy was when he entered a competition at university. He was broke at the time, and hoped to win the $500 first prize. His stand-up performance earned him third place and qualified him for a statewide universities' final, which he did win.

Blake's girlfriend, , is an actress who formerly starred in the Australian soap opera "". As of November 2007 they had been dating almost 3 years.

Blake has collaborated with fellow comedian Andy Lee as the duo Hamish and Andy since 2003, when they performed their breakout show at the Melbourne International Comedy Festival, a stage production about a trip they had taken to North Queensland in Blake's old car. Soon after they gained a drive-time shift on RMIT's SYN Radio and a show called "Radio Karate" on community-access television station , which they created in collaboration with and several other school friends. "Radio Karate" won an Antenna Award for best comedy program at the inaugural National Community Television Awards in February 2004, and one month later were offered a national comedy program on Australia's .

"The Hamish and Andy Show" premiered on the Seven Network in March 2005, but failed to achieve ratings success and was cancelled after two weeks. Reviewers acknowledged the duo's talent, but criticised the show as "poorly executed".

McManus's company, , also helped the duo develop "", a mock current affairs show that aired on Network Ten in 2006. Blake says that the experience of creating "Real Stories" was much more enjoyable than "The Hamish and Andy Show" because they had greater control over the series. Blake and Lee wrote, acted, directed, filmed and produced the show with input from Ryan Shelton and Tim Bartley.

He has a monthly column in the Australian women's magazine "Cosmopolitan". He was also the winner of the TV Fugly Award for Spunkiest Male TV Personality in 2008. [cite web|url=http://www.fugly.com.au/awards/2008/|title=2008 Results - TV Fugly Awards - We love bad telly!|publisher=TV Fugly Awards|accessdate=2008-05-05]