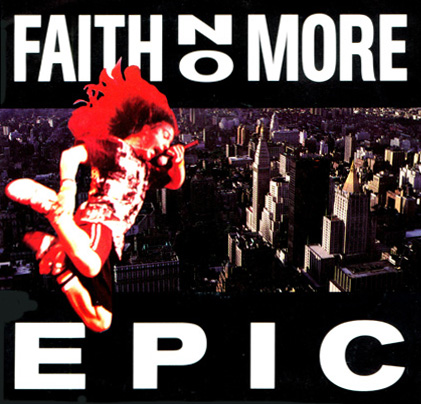 
Certification=Gold
Last single =""
(1990)
This single ="Epic"
(1990)
Next single =""
(1991)
Misc = Extra musicsample
filename =FNM_Epic_Sample.ogg
format =
title =Epic
Type =single"Epic" was a breakthrough hit single by the band . It was released in 1990 and featured on their third album "The Real Thing". It peaked at number nine on the , and was the band's only Top Ten hit in the United States. It is the band's most popular song and a staple in their concerts.

This song features a combination of heavy metal with , paving the way for and . Some rap and hip-hop artists have cited this song as a major influence in how they shout and syncopate their lyrics with heavy guitar-driven riffs.

"Epic" has been covered both in concerts and on the " Higher Voltage" CD, a compilation of artists covering other songs. Such artists include the Welsh rock band ; the CD was released . ["" issue 1164 June 20th 2007] The band Atreyu also covered the song on their album "", and the Swedish indie band plans to cover it in their 2008 tour. [cite news |first=Paul|last=Thompson|authorlink= |coauthors= |title=Love Is All Cover Faith No More|url=http://www.pitchforkmedia.com/article/news/145467-love-is-all-cover-faith-no-more-add-dates|work=Pitchfork|publisher=Pitchfork Media, Inc.|date=September 16, 2008|accessdate=2008-09-19 ] . A master track of the song also appears in the music video game "Rock Band". A shortened version of the song is also featured in the racing game, "". The song also appeared in a commercial for the console versions of , with the announcer stating about the game's "epic return".

The for "Epic", which featured surreal images combined with performance footage of the band soaked by an artificial rainstorm on a sound stage, was subject to controversy because of the perceived treatment of a , which is out of water and dying on camera—it was in fact footage; the fish was returned to its tank alive in a matter of seconds.

During an interview, the band joked that the fish seen flopping around in the music video belonged to Icelandic singer , which they claimed to have stolen from her at a party. There are also stories of Björk giving the fish to the keyboardist after a poetry reading in San Francisco. [ [http://www.songfacts.com/detail.php?id=3256 Epic by Faith No More Songfacts ] ]

Guitarist Jim Martin was a schoolmate, close friend and fan of the early bassist . In the video he can be seen wearing a t-shirt with a photo of Cliff with the words "A Tribute to Cliff Burton". In addition, can be seen wearing a shirt [cite journal |last=Cee |first=Gary |authorlink= |coauthors= |year=1990 |month=November 30, |title=Faith No More: Inside the insatiable Mike Patton |journal=Circus Magazine |volume= |issue=#369 |pages=pages 62-64 |id= |url=http://negele.org/db/index.php3?band=2&year=1990&month=11&day=30&id=1531 |accessdate=2008-09-26 |quote= ] that reads "There's A Tractor In My Balls Again".

;UK & International releaseThe initial release of "Epic", released in the , , and . The 7" editions only had Tracks One, Two, and occasionally Thre. Track Five was exclusive to Japanese issues.

;American releaseThis version was released in America as a "Slash sticker" labelled 7" and as a cassette with a "Burning Splash" sleeve.tracklist
title1=Epic |note1=Radio remix |length1=3:59
title2=Edge of the World |note2= |length2=4:09