"PC Design" redirects here. For the design of the IBM PC and its clones, see IBM PC.

The KoalaPad is a graphics tablet produced from 1984 by U.S. company Koala Technologies for several early 8-bit home computers, including the Apple II family, TRS-80 Color Computer (TRS-80 Touch Pad), Atari 8-bit family, and Commodore 64, as well as for the IBM PC.

Originally designed by Dr. David Thornburg as a low-cost computer drawing tool for schools, the Koala Pad and the bundled drawing program, KoalaPainter, was very popular with home users as well (KoalaPainter was called KoalaPaint in some versions for the Apple II, and PC Design for the IBM PC). A program called Graphics Exhibitor was included for creating slideshow presentations from KoalaPainter drawings.

The pad was four inches square (i.e. roughly 10×10 cm) and mounted on a slightly inclined base with the back of the pad higher than the front. At the top, "behind" the pad, were two buttons. The pad hooked into the computer using the analog signals of the joystick ports (the so-called "paddle" inputs), which meant that it had a fairly low resolution and tended to jostle the cursor if moved during use.

Instead of the drawing stylus, the pad could as easily be operated by the user's fingers for less precision-demanding work, such as selecting between menu items (i.e. using the pad as a kind of "indirect touch screen").

The top-mounted buttons tended to be somewhat frustrating to use, as the user had to "reach around" the stylus to push the buttons in order to start or stop drawing. A similar tablet from Atari, the "Atari CX77 Touch Tablet", addressed this with a built-in button on the stylus,[1] which some enterprising users adapted for use with their KoalaPad. 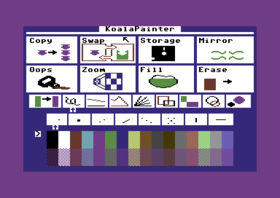 The pad shipped with a simple bitmap graphics editor called KoalaPainter (aka KoalaPaint or PC Design), developed for Koala by Audio Light, Inc. Although bundled with the pad, KoalaPainter could also be operated using an ordinary digital joystick.

One unique feature of the program, for its time, was that it held two pictures in the computer's memory, allowing the user to flip from one to the other—a function commonly used in order to study the differences between an original and modified picture, and to copy and paste between two different pictures.

Some third-party bitmap editors could also be used with the KoalaPad, such as Broderbund's Dazzle Draw for the Apple II.

Koala Technologies offered more software than the bundled KoalaPainter and Graphics Exhibitor to use with the pad. Among these applications, marketed under the moniker KoalaWare like KoalaPainter itself, were educational software for use with customized keypads and overlays, such as spelling tools, music programs, and mathematics instruction, as well as software for "translating" graphical designs into LOGO programs.