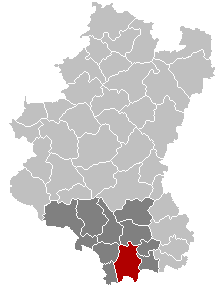 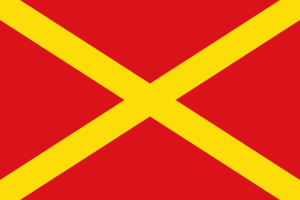 Virton is the most southerly town in and the administrative centre of a Walloon municipality ( _fr. commune) and district ("arrondissement") of the same name, located in the Belgian province of Luxembourg. Virton is the principal town of the small region of Belgian Lorraine known as the , famous for its .

Several archeological finds indicate that the area was already inhabited before the Romans built villas there and baptized the town "Vertunum". In the early 5th century, the Romans had to flee the Germanic invasions. Their settlement was destroyed and rebuilt by the somewhat to the north.

Virton was mentioned for the first time in ’s bull of 1183 as a of the House of . As overlords of Virton, the Counts of Chiny could raise taxes (the "tonlieu") on the various goods sold at the local market, which already existed in 1270. In 1441, the , was sold to Philip the Good, Duke of Burgundy. From that date, Virton, like many other Walloon cities, became embroiled in more than two centuries of wars between , , and the , with all the fighting, famine, epidemics (plague…), and economic disasters that ensued. The city fared better under the rule of in the 18th century, thanks in part to the development of the Lorraine steel industry.

The shattered those advances. Virton had to wait until the departure of Napoleon in 1815 to see prosperous times again. Virton enthusiastically participated in the and even in the French Revolution of 1848. On , , at the onset of , hundreds of inhabitants were summarily executed by the invading German army, while mass deportations occurred during . Virton is now the commercial and tourist centre of the region.

*The small hilly streets and colourful houses.
*The church of St Lawrence, built between 1825 and 1830 with a classical .
*Remnants of the medieval defensive wall.

*The city’s mascot is "D’Jean d’Mady", a typical, joyful, and resourceful inhabitant who was allegedly born in one of the neighbouring villages in 1585.
*Since 1935, Virton owns two traditional giants who take part in the local festivities.

Virton, , and many other neighbouring villages were the homes of many Canadian families whose fathers/husbands were stationed nearby at Station No. 1 (F) Wing, in Marville, . Prior to moving the base to , , there were ceremonies in these towns and in , (Permanent Married Quarters), where the Canadians left three small 'thunderbird' s. These totems are still there and were rededicated in September 2005 on the 50th anniversary of the opening of the base.