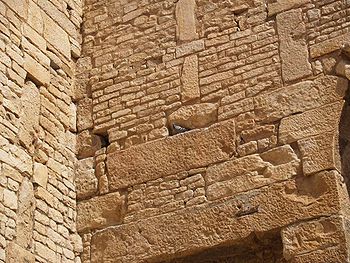 Opus africanum is a form of ashlar masonry used in Carthaginian and ancient Roman architecture, characterized by pillars of vertical blocks of stone alternating with horizontal blocks, filled in with smaller blocks in between.

Its name derives from the Roman province of Africa, and is common in North Africa, but also found in Sicily and Southern Italy.