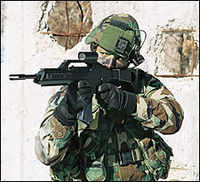 An early XM8 mockup after the break up; became part of OICW Increment 1

The Objective Individual Combat Weapon or OICW was the next-generation service rifle competition that was under development as part of the United States Army OICW program; the program was eventually discontinued without bringing the weapon out of the prototype phase. The acronym OICW is often used to refer to the entire weapons program.

It was started in the aftermath of the Advanced Combat Rifle (or ACR) during the 1980s. Like the ACR program, it has largely been a failure in terms of achieving the specific program goals (e.g. replacing the M16) and has cost millions of dollars, but has resulted in many innovative weapons and weapon concepts as well as offshoot programs of its own. 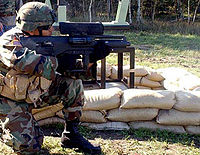 A working XM25 prototype is tested in 2005; this was part of OICW Increment 2

The central idea of the program was to develop a rifle that enabled the attacking of targets behind cover by using airburst munitions. The munitions were to be much smaller than pre-existing grenades and grenade launchers, but large enough to be effective. The idea was refined into a combination of a short assault rifle and semi-automatic, low-velocity cannon firing air-bursting munitions. The OICW aimed to use advances in computer technology in a weapon that fired grenades automatically pre-set to explode above or beside targets hidden from view. Fragmentation from the exploding grenades would defeat the target when normal rifle fire would be ineffective.

The winners of the first competition for the project during the 1990s were ATK and firearms manufacturer Heckler & Koch with the XM29 OICW. They went on to build numerous prototypes of the rifle for the United States military in the late 1990s. These projects centered on using a programmable 20 mm airburst munition-firing rifle by itself or with other projectile-based weapons attached. The 20 mm launcher was analyzed in various configurations, including a launcher by itself, with a 5.56 mm weapon (based on the HK G36), or with a MP7 PDW.

By the early 2000s, the weapon had settled on a design and was classified as the XM29. The XM29 was based on a the HK CAW (Close Assault Weapon) (Cal. 18.5 x 76 or 12 Gauge non-conventional). However, the weapon had serious problems - it did not meet weight or cost targets, and the 20 mm XM1019 High Explosive Air Bursting (HEAB) did not seem to be lethal enough in testing. To compound matters, the kinetic-energy component had to be light and short in length. As a result the 5.56x45mm NATO barrel had a length of only 250mm (9.8 inches), which is too short to generate enough muzzle velocity to be effective. It was also too heavy and too large to be operated effectively by a soldier.

This resulted in the army starting development on new weapons, and finally shelving the XM29 in 2004. The kinetic energy component split off into the XM8 rifle program and the airburst component developed into the XM25 airburst weapon. According to a presentation by Major Kevin Finch, Chief of the Small Arms Division of the Directorate of Combat Developments at the U.S. Army Infantry Center, there were three main parts to the OICW program.

Increment 1 (OICW 1) was a competition for a whole weapon system family similar to the XM8. The weapon system was to potentially replace the M4 carbine, M16 rifle, M249 light machine gun and some M9 pistols. Other arms companies had contended that the OICW project goals had changed enough to warrant another competition. Potential challengers could include a weapons system based on an updated M16, the Steyr AUG, the aforementioned FN SCAR, and potentially any other manufacturer that fulfilled the Army requirements for participating. It also listed the shotgun being replaced by a modular shotgun system (XM26 LSS) mounted on the OICW 1 winner.

The Increment 1 portion was put on an eight-week hold in July 2005, primarily to take into account input and needs of other services. On October 31, 2005, the OICW I program was cancelled. The reason given for the cancellation was stated as: "This action has been taken in order for the Army to reevaluate its priorities for small caliber weapons, and to incorporate emerging requirements identified during Operation Enduring Freedom and Operation Iraqi Freedom. The Government will also incorporate studies looking into current capability gaps during said reevaluation."

OICW Increment 2 was a stand-alone airburst weapon the (XM25). This is a standalone launcher that uses bigger 25 mm munition, and was intended to be a special applications and support weapon, not an individual combat weapon as previous models were. In 2005, the weapon underwent limited field trials and combat testing. 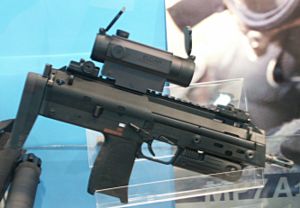 In the late 1990s the Heckler & Koch MP7 was conceptualized as the kinetic energy component of the SABR (later XM29); the XM29 was put on hold, but the MP7 entered production in 2001

In the aftermath of the ACR program, the OICW program began. There were two main contenders, one design by AAI and its companies, and the other by ATK (with H&K and other companies); ATK and H&K won. 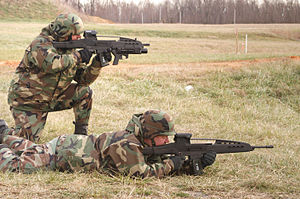 One tester is kneeling with a XM8 Carbine and XM320 attached, the other has the XM8 sharpshooter 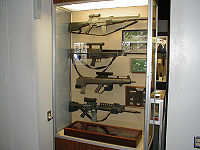