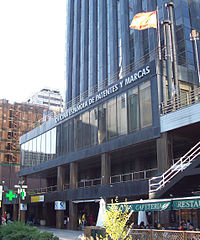 Seat of the OEPM, in Madrid.

The Spanish Patent and Trademark Office (Spanish: Oficina Española de Patentes y Marcas, sometimes abbreviated SPTO or OEPM) is a body of the Ministry of Industry, Tourism and Trade of Spain.[1] The Spanish Patent and Trademark Office is in charge of patents in Spain. It also acts as International Searching Authority (ISA) and International Preliminary Examining Authority (IPEA) under the procedures established by the Patent Cooperation Treaty (PCT).[2] Since May 24, 2008, its Director General is Alberto Casado Cerviño.[3][4]