Next to the film exit lip is an Interleaved 2 of 5 barcode and a printed number which represent the I3A assigned DX number, the number of exposures and a proprietary manufacturer's code. The DX number identifies the manufacturer, film type, and by inference, the necessary developing process type. This is used by automatic photo-finishing machines to correctly process the exposed film. (Kodak US patent 4965628) 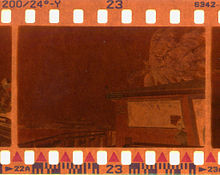 Below the sprockets under each frame of 135 film is the DX film edge barcode. The barcode is invisible until the film has been developed. It is optically imprinted as a latent image during manufacturing. They are used by photo finishers to identify and align each frame for printing. It consists of two parallel linear barcodes, one for a synchronizing clock, and the other encoding film data such as type, manufacturer and frame number.(Kodak US patent 4965628)

The outside of film cartridges are marked with a DX Camera Auto Sensing (CAS) code readable by many cameras. Cameras can then automatically determine the film speed, number of exposures and exposure tolerance. The first cameras to use the technology are said to be the Konica TC-X SLR and Pentax Super Sport 35 (PC 35AF-M)[1] in 1984.

The DX Camera Auto Sensing code takes the form of a grid of contact points on the side of the metal cartridge surface that are either conductive or non-conductive. Electrical contacts in the camera read the bit pattern. Most cameras read only part of the code; typically, only the film speed is read, and some cameras aimed at the consumer market only read enough bits to tell apart the most common film speeds. For example 100, 200, 400, and 800 can be detected by reading only S1 and S2 and ground.

On 35mm film cartridges there are two rows of six rectangular areas. The two left-most areas (with the spool post on the left) are both common (ground) and are thus always bare metal. The remaining 5 bits in the top row represent 32 possible film speeds. But only the 24 speeds representing the 1/3 stops from ISO 25/15° to 5000/38° are used. The codes are not in strict binary order.

In the second row, the first 3 bits represent 8 possible film lengths, although in practice only 12, 20, 24 and 36 exposures are encoded. The remaining 2 bits of the second row give 4 ranges of exposure tolerance, or latitude.

Where "G" are the two common-ground contacts, "S" is the film speed, "L" the film length, and "T" the exposure tolerance.