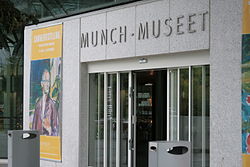 Munch Museum (Munch-museet) is an art museum in Oslo, Norway dedicated to the life and works of the Norwegian artist Edvard Munch.[1]

The museum was financed from the profits generated by the Oslo municipal cinemas and opened its doors in 1963 to commemorate what would have been Munch's 100th birthday. Its collection consists of works and articles by Munch, which he donated to the municipality of Oslo upon his death, and additional works donated by his sister Inger Munch, as well as various other works obtained through trades of duplicate prints, etc.

The museum now has in its permanent collection well over half of the artist's entire production of paintings and at least one copy of all his prints. This amounts to over 1,200 paintings, 18,000 prints, six sculptures, as well as 500 plates, 2,240 books, and various other items. The museum also contains educational and conservation sections and also has facilities for performing arts.[2]

The museum structure was designed by the architects Einar Myklebust and Gunnar Fougner (1911-1995). Myklebust also played an important role in the expansion and renovation of the museum in 1994 for the 50th anniversary of Munch's death. This site has also been the location of filming for an Olsenbanden-movie from 1984. The City of Oslo promoted an architectural competition for a new Munch Museum in the area of Bjørvika, a new urban development were the Oslo Opera House is also located. The new museum will be completed in 2013 by the Spanish studio Herreros Arquitectos.[3][4]

Theft of The Scream

On Sunday, 22 August 2004, two paintings by Munch, The Scream and Madonna, were stolen from the Munch Museum by masked men wielding firearms. The robbers forced the museum guards to lie down on the floor while they snapped the cable securing the paintings to the wall and escaped in a black Audi A6 station wagon, which police later found abandoned. The paintings were recovered by Oslo Police on August 31, 2006. For more details on the theft see The Scream.[5]