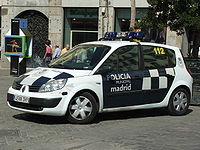 A Renault Scénic of the Policía Municipal of Madrid

In Spanish towns and cities, the Policia Municipal (Municipal Police), also known as the Policia Local or Guardia Urbana, is a police force organized at the municipal level.[1] In towns and villages that are too small to organize a force, their function is performed by the Guardia Civil or Autonomous Community force, assisted by uniformed municipal employees with limited law enforcement authority called "Vigilantes Municipales", where such exists. They are usually armed.