The Motorola SLVR is a series of mobile phones from Motorola, and is one of the series in the 4LTR line. The first phones were out in early 2005. They are designed to be very thin and lightweight.

The SLVR L2 was introduced in 2005. The L2, which lacks a camera, external memory, and music features, is marketed specifically to corporate and government markets which generally prohibit their employees from using phones with the listed features.[1] It is not marketed specifically under the SLVR designation.

The SLVR L6, also from early 2005, was released shortly before its heavily advertised brother, the L7 (see below). The L6 held the title of the thinnest mobile phone in the UK for a short while, before being beaten by the Samsung P300. Features of the L6 include Bluetooth, MP3 ring tones, camera and video on it. It is basically a cut-down version of the SLVR L7 with all functions except for iTunes (U.S only) and the use of external memory. The SLVR L6 also has a smaller screen than that of the SLVR L7.

As of November 2005, (when it was first introduced) the Motorola SLVR L6 ranked as one of the ten highest-radiation phones in the United States at a digital SAR level of 1.58. [1]

The L7 was released at the same time as the L6 (early 2005), but the L7 is more professional, and is one of a few non-Apple branded phones released featuring iTunes support, allowing the user to play up to 100 downloaded songs that are stored on the phone's removable microSD card. It is known for its dedicated web browser and web video downloader which critics have said is the main feature of the SLVR.

The SLVR L7 also features Bluetooth connectivity, a digital camera with 4x digital zoom and has a speakerphone. Carried in the United States by Cingular Wireless, Metro PCS, and Cricket Communications, and carried in Canada by Rogers Wireless, it superseded the earlier Motorola ROKR E1, which was withdrawn from the market due to lackluster sales. There is also a quad-band World Version of the L7 available internationally, which comes without the iTunes software. Instead, the standard Motorola Digital Audio Player is included. The SD card is used for storing videos downloading from the web via GSM/GPRS. 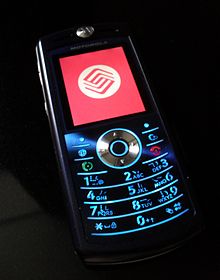 This is a refresh version of the phone that features a 1.3megapixel camera, EDGE and some internal hardware changes - it is effectively a Motorola RIZR Z3 with a 1.3MP camera in a candybar form factor. The various model designations are for different markets and case styles. Note that the L7i is not the same phone as the "L7 i-Mode" - despite the very similar external appearance, the internal parts are almost completely different.

Similar to the original SLVR, this CDMA version offers a Sprint or Motorola music player which can hold as many songs as the size of the memory card in the phone. It also features EvDO high speed data. Currently the phone is offered by Sprint, Claro, U.S. Cellular, MetroPCS, Cricket Communications, and a silver version for Verizon Wireless. It comes in silver(Verizon Only), black, and red (Sprint only).

While Sprint's Music Store/Player ("powered by Groove Mobile") will list all songs on the SD card, it fails to play any that reside above the first 1GB of space on the card, producing "Error M506". It also fails to play random tracks if some tracks have a long pathname (directory name length plus file name length), where "long" is approximately over 32 characters.

The SLVR has an almost identical software user interface (UI) to the RAZR which is regarded[by whom?] as clumsy and ill-designed. Other criticisms are when the battery is low: The SLVR emits a loud beep every few minutes, causing problems when people are sleeping or in business meetings. The beeping can only be disabled by putting the phone in silent mode, vibrate, switching it off, or plugging it in for battery recharging.

The complete Motorola SLVR L7 list of specifications are:[3]