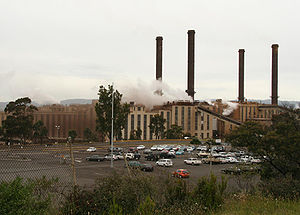 Energy Brix Power Station is a brown coal powered power station located at Morwell, in Victoria, Australia. The power station is used to supply electricity for the retail market, as well as the production of briquettes in the adjacent Energy Brix briquette works.

Work on the power station and briquette works commenced in 1949 by the State Electricity Commission of Victoria (SECV), when field works on the Morwell open cut mine commenced, and briquette production equipment was ordered from Germany. It was originally known as the Morwell Power Station. Production at the plant started in 1956, with the briquettes produced used for domestic and industrial use, as well as town gas production for Melbourne at an adjacent gasworks by the Gas and Fuel Corporation of Victoria.[1]

The power station and briquette works were split from the SECV in November 1993, when from former Morwell Briquette and Power division was established as a Government Business Enterprise named Energy Brix Australia. At the time of the split, the plant employed 370 people, and exported 80,000 tonnes of briquettes to Germany, Slovenia, Korea, Japan, New Zealand and Cyprus.[2] Energy Brix Australia was sold on 4 August 1996.[3] In February 2006 a licence was granted to the company for the retail sale of electricity from its plant.[4]

Heat is reclaimed from the steam produced by electricity generation, and used to dry brown coal from up to 65% moisture down to 10% for use in coal briquettes manufactured on the site for both domestic consumption and export. The Energy Brix power station has five steam turbines with a combined generation capacity of 170 MW.[5] The power station sources raw brown coal for briquette production from the Yallourn and Loy Yang open cut mines, and its steaming coal for power generation from the Morwell open cut mine.[6]

Carbon Monitoring for Action estimates this power station emits 1.31 million tonnes of greenhouse gases each year as a result of burning coal.[7] The Australian Government has announced the introduction of a Carbon Pollution Reduction Scheme commencing in 2010 to help combat climate change. It is expected to impact on emissions from power stations. The National Pollutant Inventory provides details of other pollutant emissions, but, as at 23 November 2008, not CO2.