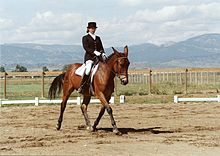 Hodges's mother is Joyce Doty, mule breeder and developer of the first "quality" mules in the United States.[1] Her adoptive father was cartoonist and Peanuts creator Charles M. Schulz. Hodges grew up as one of Schulz's five children, and did not learn until she was an adult that he was not her biological father.[2] Hodges was born in Minneapolis, Minnesota, after which her family moved to Colorado Springs, Colorado where her younger brother was born. The family eventually moved to Sebastopol, California. After graduating from The American School In Switzerland, Hodges attended Sonoma State University, where she studied psychiatric nursing. During this time she began work at Sonoma State Hospital with a rotation at Napa State Hospital as a psychiatric technician. Her career choice seemed far removed from where life would take her in the future, but, today, Hodges attributes her studies in psychology—especially her work in behavior modification science—to be at the core of her understanding of and her ability to communicate with mules and donkeys. In 1973 her mother enlisted her help in tending to the many mules and donkeys on her Windy Valley Mule Ranch in Healdsburg, California. Hodges became an assistant trainer and worked with her mother, on and off, until 1979, when her mother sold the Windy Valley Ranch.[3] Joyce Doty gave Hodges the last mule, Lucky Three Sundowner, and the last jack, Little Jack Horner, that were born at Windy Valley Ranch in 1980.[4] Little Jack Horner became the Sire Supreme of the Lucky Three Ranch lineage in Colorado.

In 1980 Hodges purchased a 10-acre (40,000 m2) former sheep ranch in Loveland, Colorado and christened it the Lucky Three Ranch. She began breeding and training what would become a top-quality line of mules and donkeys, some of them future champions. Her purpose was to prove that mules could do everything that horses could do in all kinds of recreational equestrian disciplines to further their use in modern America. As she learned more about these equines’ personalities and abilities, she began to develop her own training program utilizing her own observations and her background in behavior modification. Over the next ten years, guided by the resistance-free training techniques of Richard Shrake and merging the knowledge of many other trainers from multiple equestrian disciplines (such as Major Anders Lindgren in dressage, Rick Noffsinger in driving, Bruce Davidson and Denny Emerson in Combined Training, Al Dunning in reining), she coalesced her theories and techniques into a comprehensive method called “Training Mules and Donkeys: A Logical Approach To Longears.” [5]

During the 1970s and early 1980s, most competitive equestrian events were closed to mules and donkeys. In 1986 Hodges lobbied at the United States Dressage Federation (USDF) Convention, wrote letter campaigns, and held forums and discussions with various breed organizations in an effort to change the USDF rules to include mules and donkeys in competition.[7] This was done, but the American Horse Show Association (AHSA) still would not accept them. Mules were limited to schooling shows only and not allowed at the upper levels in the USDF shows that were governed by the AHSA. Hodges continued to work with other mule enthusiasts to get mules accepted by the AHSA. On January 18, 2004, mules were finally accepted by the AHSA, now the United States Equestrian Federation (USEF).[8] The rule was approved with consideration. Mules were now accepted in the Dressage Division of the USEF.

In 1990 her champion jack donkey, Little Jack Horner, jumped four feet in exhibition at Bishop Mule Days, winning a Special Award and making him the only formal jumping donkey in the world.[9]

Since 1999 Hodges has financially supported Colorado’s Hearts & Horses, a NARHA-approved therapeutic riding program, and donated two mules to help develop and expand this program.[10] As an equine rights advocate, Hodges supports and promotes a variety of horse and mule rescue organizations. She is also involved in the efforts to end horse slaughter and the consumption of horsemeat overseas, and the call for ethical and humane treatment and management of the wild horses and burros being overseen by the United States BLM (Bureau of Land Management).

She married Gary Fredricksen in 1969.[11] Meredith and Gary Fredricksen started managing the Sonoma Craft Magic Leather Shop making unique, original design leather clothes from 1970 up until 1975. During this time she worked a series of other jobs as a waitress and a skating instructor for the Redwood Empire Ice Arena in Santa Rosa. Her daughter, Dena was born in 1974.[12] Gary Fredricksen drowned in a swimming accident in Bear River in Grass Valley, California in 1975[13] and shortly after Meredith went to the Windy Valley Ranch to work with her mother's equines. She married Gary Hodges in 1980,[14] the same year she purchased the property that would become the Lucky Three Ranch. Meredith and Gary Hodges divorced in 1992.[15] She has two brothers and two sisters.[16]