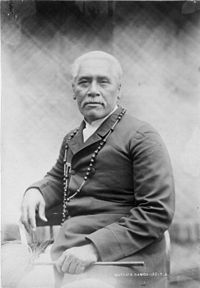 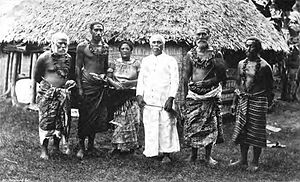 Mata'afa Iosefo (born 1832 - died 6 February 1912)[1] was a Paramount Chief of Samoa who was one of the three rival candidates for the kingship of Samoa during colonialism.[2] He was also referred to as Tupua Malietoa To'oa Mata'afa Iosefo.

The matai chiefly title Mata'afa is one of four highest titles in Samoa. From the late 19th century, Iosefo (first name) played a pivotal role during the country's colonial era when Germany, Great Britain and the United States were vying for control of the Samoa Islands. Each western power had their own chiefly candidate for the 'kingship' of Samoa.

In the late 19th century, Mata'afa Iosefo was exiled to the Marshall Islands and was permitted to return in 1898. The Germans upheld his claim for the kingship.[3]

During the Second Samoan Civil War, Mata'afa Iosefo and his followers won several battles, including the Third Battle of Vailele in which the Mataafans defeated Samoan loyalists and a squadron of British and American warships.

His push for the kingship of Samoa was also supported by the early Mau movement led by orator Lauaki Namulauulu Mamoe.[2] In 1900, Iosefo was declared Ali'i Sili (highest chief) by the German colonial powers. Iosefo succeeded his father, Mata'afa Tafagamanu, to the Mata'afa title.

Fiame Mata'afa Faumuina Mulinu’u II, a holder of the Mata'afa title became the first Prime Minister of Samoa at the country's independence. He was Samoa's best men of the village.