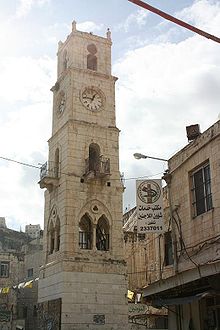 The Manara Clock Tower is a clock tower located in the middle of the central square (casbah) in the Old City of Nablus next to the Nasr Mosque in the Palestinian territories.[1]

Five stories high, it was erected in 1906 on the orders of the Ottoman sultan Abdul Hamid II to celebrate thirty years of his reign.[1][2] The tower is similar to those also built by Sultan Abdul Hamid in Tripoli and Haifa.[1] The Manara Clock Tower has an ode to the sultan in elaborate Arabic calligraphy.[3]

The Manara Clock Tower is currently the symbol of the Municipality of Nablus, established as such after the Palestinian organization Hamas won the local elections in that city.[4]