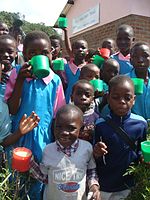 Mary's Meals is the charity formerly known as Scottish International Relief (SIR). It was founded in 2002 and has grown from its first feeding operation of 200 children in Malawi, to a world-wide campaign, providing free school meals in hundreds of schools and feeding over 500,000[1] children daily.

Magnus MacFarlane-Barrow, the charity's founder, believes that it is possible to combat and defeat world hunger and encourage education by the simple method of providing school meals. High profile supporters of Mary's Meals include the entrepreneur and Dragons' Den star Duncan Bannatyne and the philanthropist Sir Tom Farmer.

One of Mary's Meals' key projects is based in Malawi where over 400,000 children are now receiving Mary's Meals, a daily meal of 'likuni phala' a vitamin-laced porridge of Malawi-grown maize, cooked by volunteer mothers at the children's schools.

Mary's Meals began in 1992 during the Balkan conflict, when Magnus and Fergus MacFarlane Barrow organised a local appeal for blankets and food. They filled a Land Rover with aid and delivered their cargo to Medjugorje in Bosnia. The brothers, aged 25 and 27, returned to Scotland expecting to resume work as fish farmers, but in their absence their parents’ garage had been filled with more donations.

Magnus took a ‘gap year’, to deliver the aid for as long as it was needed and provided, and has never gone back to his old job. The donations didn’t stop – they still haven’t – so the project was registered as a charity, then named Scottish International Relief. 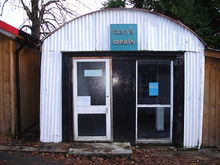 The original shed in Dalmally used to store aid during the Balkan conflict, now Magnus's office

Magnus MacFarlane-Barrow, OBE was born on 7 February 1968. He attended Oban High School as he was growing up and studied history at university before becoming a salmon farmer. He played shinty for both Scotland and Glenorchy Camanachd.[1]

He was born into a Catholic family and brought up in Dalmally Argyll, Scotland. His parents' hotel ran as a Highland hunting lodge during the season and much of Magnus' childhood was spent walking across the Highlands, Deer Stalking, and Salmon Fishing. In 1983 a visit to Medjugorje reawakened the MacFarlane-Barrow family's Catholic faith and Magnus' parents felt God was calling them to convert their hotel into a Family House of Prayer.[2] To this day people from many parts of the world come to stay in Craig Lodge Community. It was and still is from Craig Lodge that Magnus directs Mary's Meals. Magnus lives in Argyll, is married, and has 7 children. As founder and CEO of Mary's Meals his vision and ideas continue to inspire and direct the work they do.

Magnus's work has been recognised by several prestigious awards including:

Other than the Mary's Meals Campaign the charity carries out several other high profile projects, most notably the Backpack Appeal.

On a visit to Malawi in 2002, Magnus met a boy whose plight led to a new focus and the charity's main area of work today. Lying on the floor of her hut, the boy's mother was dying of AIDS, surrounded by her six children.

Magnus asked the oldest son what he hoped for in life, and he said: "to have enough to eat and to go to school one day." The request struck a chord, and led to the evolution of SIR into Mary's Meals at it exists today.

The Mary's Meals Campaign, which is the primary project - and namesake - of the charity is an international movement to set up school feeding projects in communities where poverty and hunger prevent children from gaining an education. Mary's Meals provides daily meals in school for over 400,000 children in Africa, Asia, Latin America, the Caribbean and Eastern Europe.

The Mary's Meals Campaign is hugely successful and there has been a recordable increase in school attendance and in average grades in all the schools that the project starts working in. 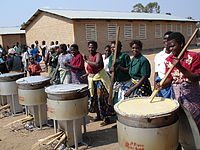 Mary's Meals Malawi is by far the biggest projects that Mary's Meals carries out. It reaches over 400,000 children in the country. It also has the lowest running costs of just £6:15[9] for Mary's Meals to feed a school child in Malawi for a year. This is due to good links with local farmers and the "army" of volunteers that make Mary's Meals happen in Malawi.

A child scrapes a bowl of Likuni Phala clean

Mary's Meals tries to work closely with local communities when establishing a school feeding project. Everyone - chiefs, teachers, parents, church leaders - are involved in the process. Usually land is donated in order to build a kitchen adjacent to the school. Teachers and parents organise a pool of volunteers who will take their turn cooking and serving the meals.

Mary's Meals provides the kitchen, cooking equipment, training, ongoing support and of course, regular supplies of nutritous[10] Likuni Phala. Each project is visited regularly by Mary's Meals staff to support the volunteers and to ensure all is going as it should. They also collect data from the school to monitor the impact school feeding is having on the pupils.

One of Mary's Meals' most high profile projects is the Backpack Project, which encourages school children to donate their old school backpacks and fill them with school materials such as notebooks, pencils, flip-flops and T-shirts, to send to children in countries such as Liberia, Uganda and Malawi. The backpack project was the subject of recent TV coverage through Five's Britain's Kindest Kids competition, and an STV feature on Holyrood Secondary School pupils' visit to Malawi.

As well as supporting long term projects, Mary's Meals and SIR has responded to emergencies across many countries, such as Bosnia and Kosovo by responding to needs with appropriate relief aid.

Cité Soleil, Haiti. Prior to the earthquake this slum built on a rubbish dump was home to 500,000

On January 12, 2010 a magnitude 7 earthquake struck Haiti at around 5pm local time. The quake killed an estimated 200,000 people,[11] left thousands more homeless and devastated the capital Port-au-Prince. Haiti was already the poorest nation in the Americas before this disaster which was why Mary's Meals was working there. Mary's Meals partners in Port-au-Prince were in the midst of the disaster and sadly members of their team were killed and their office buildings destroyed. In nearby Cité Soleil the 8 schools served by Mary's Meals were badly damaged. Magnus MacFarlane-Barrow visited Haiti a few days later and once more in July 2010. He reported progress in the massive rebuilding projects underway but expressed that with the amount of money being donated not enough was being done by the charities working in Haiti.

Cyclone Nargis left thousands dead and thousands more homeless with their livelihoods ruined. Mary's Meals already had partners in Burma and their long experience of working in the particularly difficult conditions within Burma meant they were able to gain access to areas badly affected by the floods. As a result Mary's Meals were able to run several relief and rehabilitation projects. Among them are: the provision of food, clean water and clothing, the rebuilding of 3 schools destroyed by the storms and an orphanage that will provide care for abandoned children.

In November 2007 a cyclone caused waves 10 to 15 feet in height that swept away the fragile houses of the poor in Borguna, Bangladesh. Relief materials were distributed. The community appealed to Mary's Meals for assistance and soon they were providing help to rebuild a collapsed secondary school in Borguna. The reconstructed building was be designed to double up as cyclone shelter to protect people from the community from storms in the future.

Since Mary's Meals took over as SIR's main project and eventually became the charity it has focussed most of its efforts on the two main Mary's Meals projects, The Backpack Appeal and Mary's Meals itself. Yet it still carries on with all the work it did previously under the name of SIR. 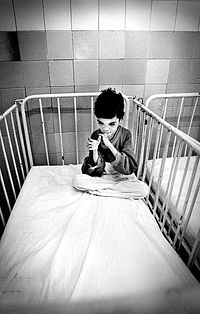 Some of SIR's first projects after the Balkan conflict were with the orphans of Eastern Europe - particularly Romania. Here it built and maintained homes for abandoned children many of whom were orphaned by the AIDs epidemic. The first such house was called Iona House - named after the Hebridean Island where one of SIR's support groups was based. The orphans were moved from cots in hospitals which they had never left and taken to the house. When they arrived some of them, as old as 7, were so starved of care that they had never even learned to walk, having never been taken out of their cots.[12] The children are now young adults but the homes continue to provide them with the support they need. Mary's Meals operate two other similar homes in Romania and other children's homes in Colombia and Peru.

The sponsor a school campaign is another successful project carried out by Mary's Meals. The Sponsor a School campaign involves an individual or group meeting the costs of feeding children at any given school or providing the money to build a kitchen onto the side of a school, or both. The campaign runs in Malawi and Liberia although there is no need for kitchens in Liberia so there it is just a case of meeting feeding costs. All those who sponsor a school in any form get a school allocated them, their name on a plaque on the side of the building and a document giving the school's profile.[13]

The Mary's Meals campaign has been criticised for relying on handouts and donations and as such being unsustainable. However the charity claims that it does not simply hand out food or rely on grants.[14] It buys locally sourced food - which helps boost local economies - and provides it in a sustainable way with a view of the overall development of the countries it works in. Whole generations of children are receiving an education they would otherwise never have had. This, Mary's Meals claims, is the source of its sustainability; it is creating a whole new skilled and educated young population in developing countries that can only benefit the country's economy and help break the poverty cycle. Mary's Meals say they take the long term view, they have exit strategies and all their projects are aimed at eventual self-sufficiency in the communities they operate in and their projects are designed to engender the self-sufficiency straight away.[15]

Being a British charity it is still Britain in which Mary's Meals has the largest infrastructure of supporters in place. Support groups meet and hold events in many towns and cities in the UK. Parishes and businesses have adopted the charity in many areas. Mary's Meals also has several charity shops in various UK locations. In the last few years Mary's Meals has sought to extend its support beyond the borders of the UK. Mary's Meals now have supporter bases in America, Australia, Austria, Germany, Croatia, Ireland, Italy and Bosnia -Herzegovina.[16] These bases raise money and awareness for the charity in their areas. Some take part in the Backpack appeal and all fundraise for the Mary's Meals campaign and for the emergency aid campaigns.

On 12 August 2010, Mary's Meals Chief Executive Magnus Macfarlane-Barrow was praised a CNN Hero[17] for his role in founding and running Mary's Meals. A video detailing his work with Mary's Meals was broadcast across the USA and the internet, reaching millions of viewers and further promoting the work of Mary's Meals.