A magistrates' court or court of petty sessions, formerly known as a police court, is the lowest level of court in England and Wales and many other common law jurisdictions. A magistrates' court is presided over by a tribunal consisting of two or more (most commonly three) justices of the peace (also known as magistrates) or by a district judge (formerly known as a stipendiary magistrate), and dispenses summary justice, under powers usually defined by statute. The tribunal presiding over the Court is commonly referred to simply as the Bench.

Magistrates and district judges are assisted in court by the justices' clerk and their assistants, also known as legal advisers or court clerks, whose role is to ensure that procedures are adhered to and that the Bench is properly directed as to the law and its powers, as well as seeing that the Courts' business is dealt with efficiently. The clerk's role is far more significant where lay magistrates are presiding because they are not legally trained and so require more advice on legal matters than a district judge. The clerk ought not exert any influence upon the Bench - to which the advice they provide must be neutral - but nevertheless the advice of the clerk carries considerable weight. To the end, the Practice Direction 2000 attempts to resolve issues concerning the influence of clerks over magistrates. It states that clerks should only advise on point of law and all advice should be given in open court in front of all present.

Magistrates' courts deal with minor offences (generally, fines of up to £5,000 and imprisonment of up to 6 months.[1]). However, when dealing with two or more offences, a magistrates' court has the power to impose a sentence of up to a year if at least two of the offences are triable either way. For certain specified offences, maximum fines permitted to magistrates may be higher (for example, for fly tipping up to £50,000.[2]) Magistrates sitting in a Youth Court have the power to impose a sentence of youth detention (known as a Detention and Training Order or DTO) for a period of up to two years.

They are often considered to be the workhorses of the criminal justice system in England and Wales and handle over 95 percent of the criminal cases in that jurisdiction. When an either way offence is to be tried at the Crown Court, magistrates are responsible for committal to the Crown Court (a task in former times dealt with by a grand jury), which requires the Court to consider whether there is a case to answer based upon statements and exhibits submitted to the court.

Some common law jurisdictions continue to maintain a lay magistracy: those magistrates who are not legally trained. In England, they date from at least 1327, when an Act provided that "good and lawful men" be appointed in every county in the land to guard the peace. Justices of the peace used to be noblemen or squires but they now are more like what Alexis de Tocqueville described in Democracy in America as "well-informed citizens". In England and Wales, the term "lay magistrate" is discouraged as it possibly gives the false impression there are two types of magistrate: lay and professional.[citation needed] In the magistrate's court, the presiding roles are either district judges or magistrates.

The grand jury system, which still exists in the United States, has been abolished in England and Wales. Instead magistrates now perform the grand jury’s functions of indicting those accused of offences which need to be tried by a jury and committing them to the Crown Court for trial.

Magistrates' court cases in England & Wales are mostly prosecuted by the Crown Prosecution Service (CPS), and a CPS representative will always be present at magistrates' courts in order to prosecute these cases. A minority of cases are prosecuted by other law enforcement agencies, such as HM Revenue & Customs, RSPCA or the Health and Safety Executive, and in such cases a solicitor or barrister will attend especially to prosecute.

Defendants are entitled to represent themselves, and often do so in minor cases such as Road Traffic offences. However, it is more usual for a defendant to be represented by a solicitor or barrister. In most magistrates' courts there will be a duty solicitor available to represent any defendant who does not have his/her own solicitor. 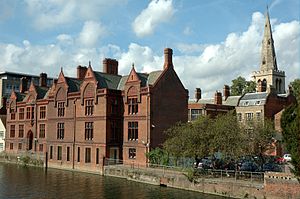 The Bench may be addressed as "Your worships" if it consists of lay justices, or "Sir/Madam" as appropriate if a district judge is sitting. Likewise, it is equally appropriate simply to address the chair of the Bench as "Sir" or "Madam".

Bail, summons or in custody

When a defendant first appears before a magistrates' court, they will do so in one of three circumstances. They will either appear on bail having been charged with an offence and compelled to attend court under penalty; in response to a summons, which requires attendance but does not, in the first instance, carry any penalty for non-attendance; or in custody, having been refused bail by the police. If the defendant is on bail, s/he must first surrender to the custody of the court, which generally means stepping inside the dock of the court which is usually locked until the hearing is concluded.

Whichever the circumstance, the first requirement is to identify him/herself to the Court. Once the Court is satisfied as to the identity of the defendant, it must consider the charges. If the charge(s) is a summary offence, the Court will generally expect a plea to be taken. If the plea is one of "not guilty", the Court will fix a date for trial, taking into account the number and availability of the witnesses.

If the charge is an either way offence, the "plea before venue" procedure is carried out. In this procedure, the defendant must indicate what his/her plea to the charge would be. If the defendant indicates a plea of "not guilty", or declines to indicate a plea, the Court hears an outline of the facts from the prosecution and representations from the defendant or his representative, and then determines whether the case is suitable for summary trial or not. The Court will decline jurisdiction to try the case if it decides that the sentencing powers of the magistrates' court are inadequate to deal with the case. In such cases, the case will be adjourned, normally for a period of between four and eight weeks, for the prosecution to prepare the case for committal to the Crown Court. If the Court accepts jurisdiction, the defendant is still entitled to elect to have his/her case tried at the Crown Court.

In the case of offences which are indictable only, no plea is taken and the case is sent forthwith to the Crown Court.

In the event of a plea of guilty, the Court will then consider sentence. For the most minor offences where the appropriate sentence is one of a fine or discharge, this will usually follow immediately after the plea of guilty. However, where the offence is more serious and may justify a community-based penalty (such as unpaid work, a curfew, or a drug rehabilitation course) or imprisonment, the case will usually be adjourned for the probation service to interview the defendant and prepare a pre-sentence report in which a recommendation as to the most appropriate sentence will be made. When the defendant returns to court for sentence, the Bench will consider the report along with any mitigation put forward by the defendant before passing sentence. Magistrates have the power to impose sentences of up to six months imprisonment for one either-way offence, and to impose consecutive sentences for multiple either-way offences up to a maximum of twelve months.

In some serious cases, the Court may commit the defendant to the Crown Court for sentence where there are greater powers of punishment.

On each occasion that a defendant appears before the Court, the issue of bail must be addressed. Defendants may be released on bail, which is an order of the Court compelling a defendant's future attendance, which may have conditions attached to it where such conditions are considered necessary either to ensure the defendant's future attendance, prevent the commission of further offences, or prevent the obstruction of justice. If the Court decides that no conditions exist which could achieve these objectives, the Court may remand the defendant in custody until the next hearing.

When dealing with committal proceedings, it is the role of the Bench to decide whether a case to answer, or prima facie case, exists on the basis of the prosecution statements. In the vast majority of cases this will have been agreed beforehand by the defendant's representative, but where this is in dispute, the Bench must read, or have read to them, the entire prosecution case and then hear argument from the prosecution and defence before ruling on the issue. If the Court finds that there is no case to answer, the matter is discharged; if not, the case is committed to the Crown Court for trial.

Challenges to decisions of magistrates' courts

There are four mechanisms under which a decision of a magistrates' court may be challenged: