Maarten van Heemskerck or Marten Jacobsz Heemskerk van Veen (1498 – 1 October 1574) was a Dutch portrait and religious painter, known for his depictions of the Seven Wonders of the World.

He was born at Heemskerk, North Holland, halfway between Alkmaar and Haarlem.

His father was a small farmer, Jacob Willemsz. van Veen (whose portrait he painted). According to his biography, written by Karel van Mander,[1] he was apprenticed to Cornelis Willemsz in Haarlem. Recalled after a time to the paternal homestead and put to the plough or the milking of cows, young Heemskerk took the first opportunity that offered to run away, and demonstrated his wish to leave home for ever by walking in a single day the 80 km which separate his native hamlet from the town of Delft. There he studied under Jan Lucasz whom he soon deserted for his contemporary Jan van Scorel of Haarlem. Even today, many of Heemskerck's paintings are mistaken for work by van Scorel. He boarded at the home of the wealthy Pieter Jan Foppesz (the van Mander spelling is Pieter Ian Fopsen), curate of the Sint-Bavokerk. He knew him because he owned a lot of land in Heemskerck. This is the same man whom he painted in a now famous family portrait, considered the first of its kind in a long line of Dutch family paintings.[2] 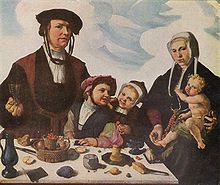 Family of Pieter Jan Foppesz. - painted before he left for his Italy trip in 1532.

In 1532 he started on a Grand Tour, with the purpose of seeing and painting the seven wonders of the world, and during which he visited the whole of northern and central Italy, stopping at Rome, where he had letters of introduction from van Scorel for the influential Dutch cardinal William of Enckenvoirt. Before he left, he painted a scene of St. Luke painting the Virgin as an altarpiece for the St. Luke's altar in the Bavokerk. On the bottom it states in a tromp l'oeil paper that he painted it for his comrades.[3] It is evidence of the facility with which he acquired the rapid execution of a scene-painter that he was selected to co-operate with Antonio da Sangallo the Younger, Battista Franco and Francesco de' Rossi (Il Salviati) to re-decorate the Porta San Sebastiano at Rome as a triumphal arch (5 April 1536) in honour of Charles V. Giorgio Vasari, who saw the battle-pieces which Heemskerk then produced, said they were well composed and boldly executed.

He painted the Seven Wonders, most notably his painting of the construction of the St. Peter's Basilica in Rome, and the Colosseum. On his return to the Netherlands in 1536, he settled at Haarlem, where he soon (1540) became president of the Haarlem Guild of Saint Luke, married twice (his first wife and child died during childbirth), and secured a large and lucrative practice.

Seven Wonders of the World

He earned money from his engravings on the seven wonders, and after he died printers still found it profitable to reproduce his engravings:

He painted large altarpieces for his friend, the art mecenas and later martyr of the Protestant Reformation, Cornelis Muys. Muys, (or Musius) had returned from a period in France to the Netherlands in 1538 and become prior of the St. Agatha cloister in Delft, which later became the Prinsenhof.[4] This lucrative and high profile work in Delft earned Heemskerck a commission for an altarpiece in the Nieuwe Kerk (Delft) for their Guild of St. Luke. In 1553 he became curate of the Sint-Bavokerk, where he served 22 years (up to the Protestant reformation). In 1572 he left Haarlem for Amsterdam, to avoid the siege of Haarlem which the Spaniards laid to the place. In Amsterdam he made a will which has been preserved, and shows that he had lived long enough and prosperously enough to make a fortune. At his death, he left money and land in trust to the orphanage of Haarlem, with interest to be paid yearly to any couple who should be willing to perform the marriage ceremony on the slab of his tomb in the cathedral of Haarlem. It was a superstition which still exists in Catholic Holland that a marriage so celebrated would secure the peace of the dead within the tomb.

The works of Heemskerk are still very numerous. Adam and Eve and St. Luke painting the Likeness of the Virgin and Child in presence of a poet crowned with ivy leaves, and a parrot in a cage - an altar-piece in the gallery of Haarlem, and the Ecce Homo in the museum of Ghent, are characteristic works of the period preceding Heemskerk's visit to Italy. An altar-piece executed for St Laurence of Alkmaar in 1538-1541, composed of at least a dozen large panels, which including portraits of historical figures is, since the Reformation, preserved in Linkoping Cathedral, Sweden, giving us a clue to his style after his return from the south.

In its absence we have a Crucifixion executed for the Riches Claires at Ghent (now in the Ghent Museum) in 1543, and the altar-piece of the Drapers' Company at Haarlem, now in the gallery of the Hague, and finished in 1546. In these we observe that Heemskerk studied and repeated the forms which he had seen at Rome in the works of Michelangelo and Raphael, and in Lombardy in the frescoes of Andrea Mantegna and Giulio Romano. But he never forgot the while his Dutch origin or the models first presented to him by Schoreel and Mabuse.

As late as 1551 his memory still served him to produce a copy from Raphael's Madonna of Loreto (Frans Hals Museum). A Judgment of Momus, dated 1561, in the Berlin Museum, proves him to have been well acquainted with anatomy, but incapable of selection and insensible of grace, bold of hand and prone to daring though tawdry contrasts of color, and fond of florid architecture. Two altar-pieces which he finished for churches at Delft in 1551 and 1559, one complete (St. Luke painting the Virgin), the other a fragment, in the museum of Haarlem, a third of 1551 in the Brussels Museum, representing Golgotha, the Crucifixion, the Flight into Egypt, Christ on the Mount, and scenes from the lives of St. Bernard and St. Benedict, are all fairly representative of his style. 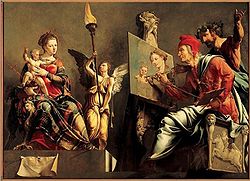 Heemskerck painted this altarpiece before he left Haarlem for Italy in 1532. It was cut down and sawn in two, and has since been rejoined, but is still short. The parrot was at the top.[5] 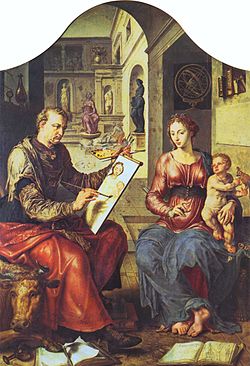 Heemskerck painted this altarpiece after he returned from Italy in 1538-40 (Musée des Beaux-Arts, Rennes). In this painting, the parrot is held by the baby Jesus.

In his depiction of St. Luke painting the Virgin, which Heemskerck painted twice for two painter's guilds, there is some confusion in the literature about a parrot. In both paintings he painted a parrot, but the parrot in a cage has been sawn off the first painting and is no longer visible.[5]

Besides there is a Crucifixion in the Hermitage of St Petersburg, and two Triumphs of Silenus in the gallery of Vienna. Other pieces of varying importance are in the galleries of Rotterdam, Munich, Cassel, Brunswick, Karlsruhe, Mainz and Copenhagen.

Heemskerck was widely respected in his own lifetime and was a strong influence on the painters of Haarlem in particular. He is known (along with his teacher Jan van Scorel) for his introduction of Italian art to the Northern Netherlands, especially for his series on the seven wonders of the world, that were subsequently spread as prints. Karel van Mander devoted six pages to his biography in his Schilder-boeck.