Sega's Dreamcast system had a number of accessories, released by both third parties and Sega itself.

Unique to Dreamcast's video hardware was the VGA mode[1][2] that allowed the machine to output 640x480p60 (Progressive Scan, EDTV standard) in RGBHV at 31 kHz to computer displays or HDTV compatible sets. For this video mode to be triggered and used, Sega released a device called "VGA box", an adapter that consisted of merely a simple plastic case providing space for the VGA port and AV out (Composite, S-Video, and audio via RCA and/or 3.5mm TRS). Many third-party versions were functionally identical to Sega's model, with the exception of the VGA cable by Blaze, which lacked the additional A/V out.

Most Dreamcast releases were VGA compatible.[3] A handful of European and North-American games however did not include the necessary flag within the boot sector on the disc ('IP.BIN') thus preventing the Dreamcast from booting in VGA mode. Unplugging the VGA box while booting a game, or boot discs like DC-X can be used as a workaround. 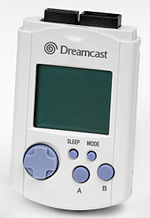 The Visual Memory Unit, or "VMU", was the Dreamcast memory card. It featured a monochrome LCD screen, a D-Pad, and two gaming buttons. The VMU could play mini-games loaded onto it from certain Dreamcast games, such as a Chao game transferable from Sonic Adventure as well as other online downloadable VMU games. It could also display a list of the saved game data stored on it, and two VMUs could be connected together end-to-end to exchange data. Also while playing games such as Tony Hawk's Pro Skater 2 or Crazy Taxi messages like "Awesome", "Rad", and "Nice Combo" would appear on the VMU screen. While playing Sonic Adventure animations not related to the game would appear on the screen, in Sonic Adventure a Chao would mimic what action the character on the screen was doing. For example, if the player was falling the Chao would appear to fall. Games such as the Resident Evil series showed the player's health. It required two CR2032 batteries for use as a standalone mini-game player, clock and address book.

Standard memory cards could also be purchased without the additional features of the VMU. Most of these were manufactured by third-party companies, (such as the Nexus Memory Card), although Sega eventually released a 4X memory card (model HKT-4100). The 4X cards did not have the VMU screen or stand-alone abilities, but they had four times the space thanks to the ability to switch between four 200-block sectors.

The VMU design cannot be considered a full success, as it was fairly power-intensive, draining the two watch batteries at an alarmingly fast rate, and the architecture could not be expanded. However, contrary to popular belief, the VMU does not need the batteries to retain the saved data once the VMU is disconnected from the controller, as it incorporates flash memory storage for this purpose — the batteries are only used when the VMU is disconnected from the controller in order to browse/exchange saved data and play mini-games in a handheld fashion away from the console. When a VMU whose battery has died is powered on, it makes a shrill beep as the console boots up. 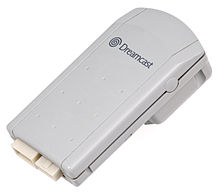 Most Dreamcast games supported a rumble pack (haptic technology), or "Jump Pack", which was sold separately and could be plugged into the controller. In Japan, the Jump Pack was named the "Puru Puru Pack".

The Dreamcast controller featured a similar design to the Sega Saturn's analog controller, offering an analog stick, a D-pad, a Start button, four action buttons (labeled A, B, X, and Y, two buttons less than the Saturn), and two analog triggers on the underside. It also contained two slots which could hold memory cards or the rumble pack, with a window on the front of the controller through which the VMU's display could be seen. The Dreamcast controller was somewhat larger than many other controllers, and some players found it difficult to hold. Other players complained about the odd positioning of its controller cord, which comes out from the bottom of the controller. However, there is a divot in the back of the VMU slots to snap the cord into, making it a little more traditional.

Dreamcast supported a mouse as well as a keyboard, which were useful when using the included web browser (fully functional), and also supported by certain games such as The Typing of the Dead, Quake 3, Phantasy Star Online and Railroad Tycoon 2. Other games such as REZ offered undocumented mouse support. 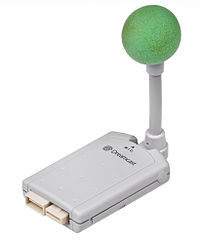 There was a microphone peripheral which was gray plastic, similar in form to a VMU or memory pack, and was inserted into a VMU slot in the contoller. The microphone itself is detachable via 3.5 mm jack, extends 90 degrees from the controller towards the player, and featured a spherical, green foam wind shroud. The microphone was used for version 2.6 of the Planetweb web browser (providing long distance calling support), the European Planet Ring collection, Alien Front Online, and Seaman, the second console game to use speech recognition in Japan, the first being Hey You, Pikachu! for the Nintendo 64. Alien Front Online was the first console game to use voice chat. The microphone was available bundled with Seaman, Alienfront Online, Kiteretsu Boys Gan Gagan (Japan), and the Planetweb browser as well as individually packaged as Sega device #HKT-7200.

Sega also produced a light gun for the system, although this was not sold in the United States, possibly because Sega did not want its name on a gun in light of recent school shootings (the Columbine High School massacre). American versions of light gun games even blocked out using the official gun. However, several third parties made compatible guns for the American Dreamcast. One of them was Mad Catz's Dream Blaster which became the official Dreamcast light gun for use in the United States. The games that did not work in United States with the official Dreamcast light gun were The House of the Dead 2 and Confidential Mission. Other light gun compatible games were Death Crimson OX and its Japanese prequel Death Crimson 2, Virtua Cop 2 on the Sega Smash Pack, and a light gun minigame in Demolition Racer No Exit. 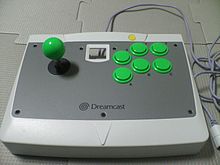 A heavy-duty Arcade Stick was put out by Sega, featuring a digital joystick with six buttons using the same microswitch assemblies as commercial arcade machines. Although it could not be used for many Dreamcast games due to the lack of an analog joystick, it was well-received and helped cement Dreamcast's reputation for playing 2D shooters and fighting games. Adaptors are now available to use the Arcade Stick on other hardware platforms.

Third-party sticks were also made, like the ASCII Dreamcast fighting pad, which some regard as having a more comfortable 6-button configuration and a more precise digital direction pad.

A twin stick peripheral was released specifically for use with the game Cyber Troopers Virtual-On: Oratorio Tangram. This add-on mimicked the original dual arcade stick setup and made gameplay much more precise. This peripheral is extremely rare and often quite expensive.

Sega developed the Dreameye, a digital camera for Dreamcast, but it was only released in Japan.

Developed as a Karaoke add-on for the Dreamcast by Sega and released only in Japan. It included a Microphone and a pass-through for the modem. It would download Karaoke songs onto the system to be played; however, it could not save any songs so you had to re-download the songs if you wanted to play them again. The servers for the system went offline in 2006.

Sega developed a special maraca controller for the Samba de Amigo music game, which consisted of a plastic mat which the player stood on, a sensor bar, and two maracas that were connected by wires to the sensor bar.

A special controller made specific to Densha de Go! only. The controller was only available in Japan and is very rare because of the few numbers produced.

A special interface used to attach a midi device (keyboard, drum machine) to the Dreamcast serial port. The only game/program to utilize this Midi Cable [4] was a Japanese only title called O-TO-I-RE Music Sequencer which is used to make tracks and loops to be saved to a VMU or you could output the sound through a VGA box to a recording device.

Toward the end of Dreamcast's lifespan, Sega created and displayed prototypes of a high-capacity VMU/MP3 player, DVD player, and Zip drive peripherals.[5] None of these items were ever released.