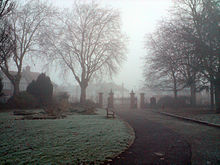 Downhills Park is a 12 hectare park in the West Green area of Haringey.

It comprises an open recreation space and a managed garden area that includes a rose garden, tennis courts and a bowling green.

In 2006 and 2007, it won Green Flag awards for maintaining excellent standards for public parks[1].

There is also a Sunday League football team named after the park (Downhills Park FC [1]) who play in the Edmonton & District Sunday Football League.