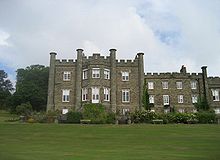 The Nunnery is an estate outside Douglas on the Isle of Man, named after a religious foundation on the site, at grid reference SC372754.

The Priory of Douglas was a monastery of Cistercian nuns, possibly dating from the 6th century, but more likely from the 12th century. It is known to have been in existence by 1313 when it was visited by Robert Bruce. The monastery was identified as Cistercian in an account written in 1515 of an inquisition hearing which took place a century earlier.

It might have originally been dedicated to St. Brigid, who, according to a tradition, founded it and was originally buried in its church. It is known that a parish church and four chapels on the island were placed under her patronage[1] This origin would place the monastery in the tradition of the Celtic Church, in which abbesses served as the local rulers of certain regions of Ireland, and would be consistent with the island's Celtic heritage. The name of the only remaining building, St Bridget's Chapel, might reflect this tradition, since a dedication to St. Mary would have been more usual for monasteries of the Cistercian Order. If this was the case, the monastery likely joined the Cistercian Order in the 12th century, when the only monastery of monks on the island, Rushen Abbey, was part of a merger with the Cistercians. This would have been an attractive step for communities of women, given a number of special privileges that this Order provided them, and was a frequent option taken by nuns in England and Scotland.

The Prioress also held the office of Baroness on the island, holding her own court. The Priory was suppressed by Henry VIII in 1540 and the properties granted to Thomas Hungate. At that point in time, the community consisted of the prioress and three nuns.

The buildings were acquired by Richard Calcot, Comptroller of the Isle of Man, who is said to have married the last Prioress, Margaret Goodman. The family occupied a house on the site until their descendants, the Heywoods, sold it to the Taubmans in 1776. A new mansion was built for John Taubman in 1823. It was designed by both John Pinch the elder and his son, John Pinch the younger, of Bath, built in the "Strawberry Hill" Gothic Revival style. St. Bridget's Chapel, served as a coach house for centuries, but it was restored to its original use as a place of worship in the 1880's.[2] The building was used in this manner until 1998, when new owners evicted the congregation, and it was deconsecrated as a chapel.[3]

The mansion remained in the possession of the Taubman family: George Taubman Goldie was born here in 1846. This remained the case until the estate was acquired by the Isle of Man International Business School in 1999 to serve as their site of operations, following which the Isle of Man University Centre was established there in 2008.

The estate has been the location for several films, including Stiff Upper Lips, Relative Values, Chromophobia and Stormbreaker. It was also occupied for a number of years by Robert Sangster, the owner of racehorses and Vernons Pools.

The Nunnery Estate included a Mill, Mill House, several farms and many cottages. The Mill House was renamed The Dolls House in 1992 and is a private house. The Mill is now called Shearwater House and is an office building. The Centre for Manx Studies and Manx Heritage Foundation will occupy the former stables and chapel in 2010.