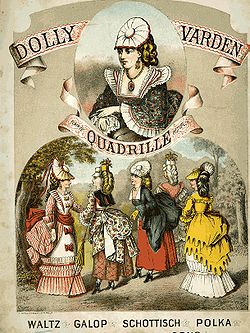 A Dolly Varden costume is a woman's outfit that was briefly fashionable from about 1869 to 1875 in Britain and America.

Dolly Varden is a character from Charles Dickens's 1839 historical novel Barnaby Rudge set in 1780. The Dolly Varden costume was a 1870s version of fashions of the 1770s and 1780s.

The term Dolly Varden in dress is generally understood to mean a brightly patterned, usually flowered, dress with a polonaise overskirt gathered up and draped over a separate underskirt.[1] The overdress was typically made from printed cotton or chintz, although it can be made from other materials such as lightweight wool, silk and muslin. A 1869 fashion doll in the collection of the V&A Museum of Childhood is dressed in the Dolly Varden mode; unusually the outfit is in dark colours.[2] The Gallery of Costume in Manchester holds a more typical Dolly Varden dress in its collections, made of white linen with a pink and mauve flowered print.[3]

A Dolly Varden hat as it relates to the dress, is usually understood to mean a flat straw hat trimmed with flowers and ribbons, very like the 18th century bergère hat.

Have you seen my little girl? She doesn’t wear a bonnet.
She’s got a monstrous flip-flop hat with cherry ribbons on it.
She dresses in bed furniture just like a flower garden
A blowin’ and a growin’ and they call it Dolly Varden..[4]

In the 1870s, the Theatre Royal in London presented an entertainment called The Dolly Varden Polka, composed by W.C. Levey.[5]

The fashion led to the naming of the Dolly Varden trout.