The Document Foundation is an open-source software organization. It was created by members of the OpenOffice.org community to manage and develop a fork called LibreOffice. The goal is to produce a vendor-independent office suite with ODF support and without any copyright assignment requirements.[1] This is in contrast to OpenOffice.org, which requires developers assign copyright to Oracle.

The Document Foundation was created partially over fears that Oracle Corporation, after acquiring Sun Microsystems, would discontinue developing OpenOffice.org as they had done with OpenSolaris.[2][3][4] 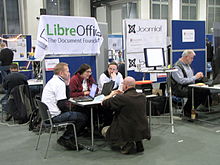 The Document Foundation was announced on 28 September 2010 with the Foundation being governed by a "Steering Committee" during the phase of initial creation. The announcement received support from companies including Novell,[5] RedHat, Canonical and Google.[6]

Jacqueline Rahemipour, Co-Lead of the OpenOffice.org Board, stated:

Although it has been stressed several times that there will be collaboration on a technical level, and changes are possible – there is no indication from Oracle to change its mind on the question of the project organization and management. For those who want to achieve such a change, but see no realistic opportunity within the current project and are therefore involved in the TDF, unfortunately this results in an “either / or” question. The answer for us who sign this letter is clear: We want a change [sic] to give the community as well as the software it develops the opportunity to evolve. For this reason, from now on we will support The Document Foundation and will – as a team – develop and promote LibreOffice.[8]

When the project was announced, the Document Foundation did not exist as a legal entity. The Steering Committee wished to formally set up a foundation, and following research chose establish the foundation in Germany.[9] On 16 February 2011, a fundraising drive was announced to raise the 50 000 euro needed to create a German foundation.[10] The required amount was raised in eight days.[11]

In assessing Oracle's role in the events surrounding the establishment of The Document Foundation, writer Ryan Cartwright in late October 2010 said:

The worst thing about this move by Oracle is that it will divide a community that didn’t need to be divided. The free software community thrives on forked projects and will actively take the path of greater freedom. Mambo became Joomla, Xfree86 has all but disappeared and StarOffice is now regarded as the less-free cousin of OpenOffice.org (and not in a good way). What Oracle have just done is put their fingers in their ears and say “la la la” to their critics from within the free software community. With that move they will recruit several more opponents... The bottom line is that in all of this Oracle had golden opportunity after golden opportunity to make real progress for everyone - not just the OpenOffice.org or the free software community. They could have been the key player and the biggest part of the most popular free software office suite and they treated it like a runny nose. They blew it.[12]

Some media observers have held the belief that the formation of the Document Foundation is just the Go-oo project reinventing itself to the long-term detriment of users. In October 2010 Linux Magazine's Bruce Byfield said:[13]

What happened, I suspect, was that Go-OO, already chafing under Sun's tight control of OpenOffice.org's direction, saw more of the same -- if not worse -- awaiting in Oracle. Hoping to succeed before Oracle could articulate its plans, Go-OO members reinvented themselves, and announced the foundation that they had long been calling for. But Oracle refused to be stampeded, and escalated the fork into something that resembles corporate warfare. Whatever the merits of either side (and I am most inclined to support The Document Foundation, although only on the principle that any number is greater than zero), I suspect that the losers in this situation will be the users. The risk is that time will continue to be spent in flame wars that could be better spent in coding. What seems likely is not only a general division and duplication of effort, but, in Oracle's case, a decision to focus on proprietary development as a defensive measure. By making the gambit that it did, The Document Foundation may have perpetuated another version of the stalemate that it was trying to break.[13]

As a result of the creation LibreOffice and the resulting loss of developers from OpenOffice.org, in April 2011 Oracle announced its intention to move OpenOffice.org to a "purely community-based project".[14][15] Oracle has also terminated their commercial product, called Oracle Open Office. As of 2 June 2011 Oracle has relicensed OpenOffice.org under the Apache License 2.0 and transferred ownership of the project and its trademarks to the Apache Foundation.[16]

In June 2011 the foundation announced that it had formed an advisory board. The initial members included Google, SUSE, Red Hat, Freies Office Deutschland e.V., Software in the Public Interest, and the Free Software Foundation. Journalist Sean Micheal Kerner noted "The new advisory board along with the stable release are proof positive that LibreOffice has a stable, healthy and supported ecosystem of vendors and developers. This isn't some flash in the pan fork, this a new direction forward." He also asked with regard to membership on the advisory board, "where is Canonical?!"[17]