Dharmrajeshwar (Hindi: धर्मराजेश्वर) is an ancient Buddhist and Hindu cave temple site of 4th-5th Century in Mandsaur district in Madhya Pradesh, India. It is an example of Indian rock-cut architecture, situated in Garoth tahsil of Mandsaur district at a distance of 4 km from Chandwasa town and 106 km from Mandsaur city. Nearest railway station is Shamgarh about 22 km. Its original name is Dhamnār (धमनार).[1]

It has the 9th century monolithic temple of Dharmarajeshwara, carving it out of solid natural rock. The temple is carved out of a rock of size 50 metre in length, 20 metre in width and 9 metre deep. It has a sanctum with a Sabhamandapa and porch. The spire of the shrine is in the north Indian style. The architecture of Dharmarajesvara temple can be compared with Kailash Temple of Ellora. There is a big temple in the middle 14.53 metre in length and 10 metre in width. Around the main temple there are seven small temples. There is a big Shivalinga in the main temple along with a statue of Vishnu. Engraved on the entrance gate are figures of Vishnu and Lakshami. There are statues of Bhairava, Kali, Shiva, Garuda and Parvati. The temple seems to be devoted to both Shiva and Vishnu.[2]

A grand fair is organized at Dharmrajeshwar temple on the occasion of Shivaratri every year when large number of people gather from the nearby areas.

The town Chandwasa itself also contains an old medieval temple which was later on destroyed and converted into a patchwork mosque, its door-frame finding place in the Museum at Indore. 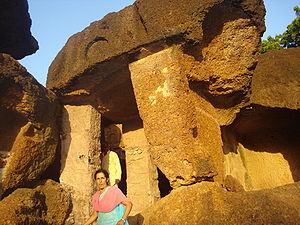 The most important and interesting monuments at Dhamnar are the Rock cut caves and temples. They are cut into the coarse laterite rock of the southern hill. There is a series of fourteen the 7th century rock-cut Buddhist Caves with monasteries and Stupas, cut in a hill called Chandanagiri in ancient times and giving its name to the neighbouring town of Chandwasa (Chandanavasa). 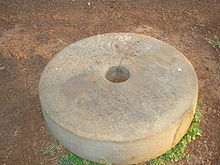 A Stone Wheel for Mortar making at Dharmrajeshwar

These caves were first noticed by James Tod who gave a number of caves to be 170 and indicated them to be belonging to Jain culture. He identified five statues as those of tirthankaras: Rishabhadeva, Neminath, Parshavanath, Shantinath and Mahavira. The local people cosider these statues to be of the five Pandavas.[3]

The important caves at Dhamnar are as under: