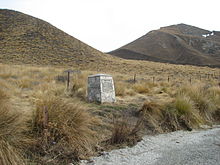 A memorial erected in 1971 commemorating the release of red deer in Otago in 1871.

Hunting is a recreational pursuit and a tourist activity in New Zealand with numerous books and magazines published on the topic.

Prior to human settlement New Zealand had no land based mammals other than bat species.[1] European settlers introduced a wide range of animals including some specifically for game hunting.

Acclimatisation societies were active for a period of 60 years from the 1860s in having introduced animals established in New Zealand. The majority were introduced for food or sport.[2]

By the 1950s red deer were recognised as an animal pest which damaged the natural environment and the government began employing hunters to cull the deer population to prevent this damage. Networks of tracks with bridges and huts were set up to gain easy access into the backcountry. These tracks and huts, now maintained by the Department of Conservation, are popular for tramping.

Foreign tourists come to New Zealand for hunting as part of guided tours or as independent hunters.

Chamois is a goat-antelope native to Europe. Alpine chamois arrived in New Zealand in 1907 as a gift from the Austrian Emperor, Franz Joseph I. The first surviving releases were made in the Aoraki/Mount Cook region and these animals gradually spread over much of the South Island.[3][4] They are often referred to colloquially as "chamy" (pronounced "shamy").

In New Zealand, hunting of chamois is unrestricted and even encouraged by the Department of Conservation to limit the animal's impact on New Zealand's native alpine flora.[4][5]

A smaller species of deer in New Zealand. Various genotypes exist with differing colour phases: (i) Common, (ii) Melanistic, (iii) Menil and (iv) White. They are often found in bush closer to pasture/farmland, as prefer grazing on grasses. Major herds are found in the North and South Islands of New Zealand.

The red deer in New Zealand produce very large antlers and are regarded as amongst the best in the world by hunters. Along with the other introduced deer species they are however regarded as a pest by the department of conservation and have at times been heavily culled using professional hunters. Additionally many hunters and outdoors enthusiasts class deer in NZ as a resource, for both food, hobbies, and an economic (tourist attraction). Ongoing issues over their pest status continue to be debated between parties.

A large bodied deer, antlers of 6 points are standard for mature stags. They are hunted on public and private land in the North Island of New Zealand.

Sika Deer were confined to the Kaweka and Kaimanawa Ranges but have been discovered in the Tararua and in Coromandel Ranges. It is thought that they had been transferred by recreational hunters.[6] In 2009 it was discovered that they had been illegally released in the Toatoa Valley.[7] Sika deer are one of the most sought after deer species to hunt in New Zealand. They are smart, beautiful animals and very cunning. Found in the central North Island, many hunters and tourists enjoy chasing these noisy (have a squeak/squeal as an alarm call), elusive animals. Currently are being controlled by aerial culling and 1080 poison. Additionally the Department of Conservation have been working with hunters to target mainly hinds, which ensures stags can develop to trophy potential and allow hunters (and tourists) the chance to secure a lifetime trophy.

Ten moose were introduced in Fiordland in 1910 but they were thought to have died off. Nevertheless, there have been reported sightings that were thought to be false until moose hair samples were found by a New Zealand scientist in 2002.[8] Moose have had patchy sightings since the last was shot in 1956. There is still ongoing debate over their existence and likely will be until legitimate footage is taken, or an animal is shot.

Found in the Fiordland National Park. These are large animals, growing very large antlers. Length has exceeded 55 inches in historic herds, but interbreeding with red deer has reduced the pure wapiti genetics. Hence antler length and spread often don't exceed 45 inches. Fiordland Wapiti Foundation have been working with Department of Conservation to actively control and protect this historic herd for hunting, through management of the population. This involves culling of red deer through aerial recovery, and also culling of hybrid red/wapiti in selection for pure wapiti type animals. Slowly genetics are becoming more pure wapiti, and antler length/points/span is increasing once again to trophy status.

These deer are found in the lower South Island, but predominantly on Stewart Island. They are challenging and elusive to hunt. They are much smaller in size compared to the American counterparts and do not produce trophy heads as large. Often the environment itself is an attraction to hunters, where many native birds are present, including kiwi roaming the forest during the day.

They are widespread throughout New Zealand and commonly are hunted using dogs. Pigs range in size and in the wild can exceed 250 pounds.They are sought after by hunters as they have a unique free range taste. They can cause a large amount of damage to the environment through rooting up of native plants.

Himalayan Tahr, also known as "thar", is a species related to the goat that was introduced into New Zealand in the 19th century. The Department of Conservation control numbers to below 10,000.[9]

Found in only two places in the world, the Himalayas and New Zealand. They are sought after by hunters for their meat, horns and skin. During winter bull tahrs develop a heavy mane and coat that is attractive as skin or rugs. Currently, there issues between New Zealand hunters and commercial operators over heli-hunting. Most hunters in New Zealand attempt to gain a trophy through climbing into the area where the tahr roam, upwards of 2000m. Heli hunting has been an issue as tourists are now flying up to where these trophy animals are, shooting them which appears to devalue the respected status as a prized trophy in New Zealand.

The duck shooting season opens in the first weekend of May and runs for 3 months. A license must be obtained from Fish and Game New Zealand every season, at a cost of $80NZD (2010 Adult). These can be purchased from most outdoor sporting stores. Strict laws govern the number of birds which are allowed to be taken daily and may change between provinces. Laws also state that ducks must be shot with a shotgun while on the wing (flying). Although a mercy shot on the ground or water is an ethical responsibility of the hunter should a bird be injured during the initial shooting. In 2006 Lead Shot was banned from use while using 10 or 12 Gauge Shot on game birds within 200m of any waterway. Non toxic Shot, mainly steel is being used as a replacement.

Hunters often build blinds known as "maimai's" to conceal themselves from ducks, often these are permanent structures besides or on rivers, lakes, lagoons or ponds. They vary in size from small (3x3m), to two storied house sized buildings, complete with running water and electricity. These maimai's are then elaborately camouflaged, usually using a combination of live and dead vegetation, camouflaged paint jobs and camouflaged netting. Hunters will also hide in the vegetation near a waterway as a temporary maimai.

To aid luring ducks in, a variety of decoy ducks and duck callers can be purchased commercially, although some hunters prefer to make their own.

Most hunters use specially trained dog's to retrieve ducks which land on the water, and many discussions are held about the best breed for the job, although most will agree that almost any breed can be trained to retrieve.

The New Zealand Deerstalkers Association was established in 1937 to promote the interests of hunters in New Zealand.[10]

In 2011 the government established the Game Animal Council to manage game animals. As well as managing tahr, chamois, deer and pig the Council will promote hunter's safety and improve hunting opportunities.[11] The New Zealand Deerstalkers Association and Tourism Industry Association welcomed the formation of the Game Animal Council but Forest and Bird, a large nation-wide conservation organisation, see it as an impediment to recreational hunters.[12]

Barry Crump, a popular New Zealand writer, often incorporated his experiences as a government deer-culler into his books.