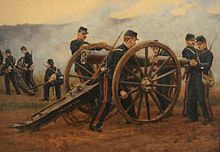 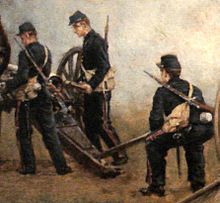 The De Bange 90 mm cannon (Mle 1877) was a type of field artillery piece developed in France by Colonel Charles Ragon de Bange in 1877, and adopted by the French Army that same year. It superseded the earlier Reffye cannon (1870) and the Lahitolle 95 mm cannon (1875). 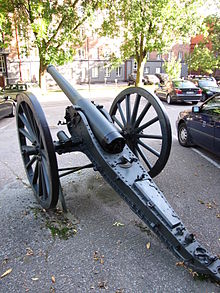 The cannon was breech loading and used the original mushroom-shaped obturator system developed by de Bange, allowing to properly seal the breech during each firing.[1] The cannon still had an important recoil, meaning that it moved backward at each firing, necessitating re-aiming every time, which considerably slowed the rate of firing. This would remain a problem with all artillery pieces until the development of the recoilless Canon de 75 in 1897.

The De Bange 90 mm was used during World War I, although it was obsolete by then, as there were important stockpiles of ammunition and French industry fell short of producing enough modern cannons for the war.[2] It was superseeded by the recoilless Canon de 75.