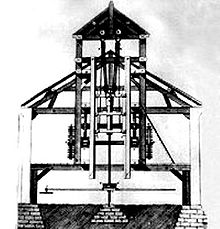 The de Vallière cannons were drilled after being founded in one piece, according to the method developed by Jean Maritz.

Florent-Jean de Vallière (1667–1759) was a French artillery officer of the 18th century. He was lieutenant-general of the King's Armies. In 1726, de Vallière became Director-General of the Battalions and Schools of the Artillery.

Through the Royal Ordonnance of October 7, 1732, de Vallière endeavoured to reorganize and standardize the King's artillery. He significantly improved the method used for founding cannons, superseding the technique developed by Jean-Jacques Keller. He thus developed the de Vallière system,[1] which set the standard for French artillery until the advent of the Gribeauval system.

Whereas numerous formats and designs had been in place in the French army, De Vallière standardized the French sizes in artillery pieces, by allowing only for the production of 24 (Canon de 24), 12, 8 and 4 pound guns, mortars of 12 and 8 French inches, and stone-throwing mortars of 15 French inches.[1]

The de Vallière system used core drilling of the bore of cannons founded in one piece of bronze, a method developed at that time by Jean Maritz, which allowed for much higher precision of the bore shape and surface, and therefore higher shooting efficiency. 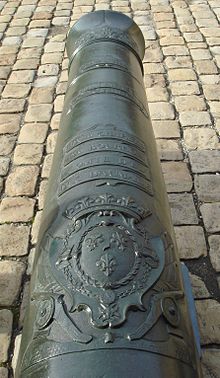 Starting with the front part, the gun had a sight design at its extremity, followed by the name of the gun (here Uranie). Then the Latin phrase "Ultima Ratio Regum," initially introduced by Louis XIV and rather descriptive of the role of the gun: "The Last Argument of Kings". Under that appeared the name "Louis Charles de Bourbon, comte d'Eu, duc d'Aumale", the Grand Maître de l'artillerie de France (Grand Master of the Artillery of France), followed by a royal emblem. In the middle of the cannon were trunnions used to position the gun in place and elevate or depress it. On top of the trunnions were dolphin-shaped ornaments used in lifting the gun.[4] 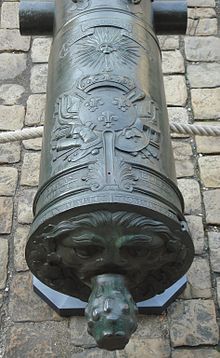 Back part of the de Valliere 24-pdr gun Uranie.

The back part occasionally included an inscription showing the weight of the cannon ball (for example a "4" for a 4-pounder), followed by a Latin inscription "Nec pluribus impar," meaning that the King is "No unequal match for many," i.e. "None his equal." This was followed by the royal crest of the Bourbon dynasty. The location and date of manufacture were inscribed (in the example "Strasbourg, 1745") at the bottom of the gun, and finally the name and title of the founder (in the example "Fondu par Jean Maritz, Commissaire des Fontes").[5] The breech was decorated with an animal face showing the rating of the gun (in the example the lion head for a 24-pounder).

The guns had cascabel designs which allowed to easily recognize their rating: a 4-pounder would have a "Face in a sunburst", an 8-pounder a "Monkey head", a 12-pounder a "Rooster head", a 16-pounder a "Medusa head", and a 24-pounder a "Bacchus head" or a "Lion head".[6]

"The surrender at Saratoga" shows General Daniel Morgan in front of a de Vallière 4-pounder. 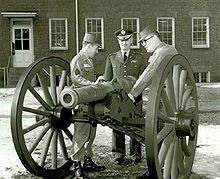 US Army personnel with a de Vallière 4-pounder in the 60s (the carriage is anachronistic: it belongs to a 20-pounder Parrott rifle).

The de Valliere guns proved rather good in siege warfare, but were less satisfactory in a war of movement.[1] This was especially visible during the War of the Austrian Succession (1747-1748), and during the Seven Years War (1756-1763) were mobility was a key factor and lighter guns were clearly in need. The lack of howitzer was another issue.[8]

Numerous de valliere guns were used in the American War of Independence, especially the smaller 4-pdr field guns. The guns were shipped from France, and the field carriages provided for in the US. These guns played an important role in such battles as the Battle of Saratoga,[9] and the Siege of Yorktown. George Washington wrote about the guns in a letter to General Heath on 2 May, 1777:

"I was this morning favored with yours containing the pleasing accounts of the late arrivals at Portsmouth and Boston. That of the French ships of war, with artillery and other military stores, is most valuable. It is my intent to have all the arms that were not immediately wanted by the Eastern States, to be removed to Springfield, as a much safer place than Portsmouth …. I shall also write Congress and press the immediate removal of the artillery, and other military stores from Portsmouth. I would also have you forward the twenty-five chests of arms lately arrived from Martinico to Springfield."
—George Washington letter to General Heath, 2 May 1777.[10] 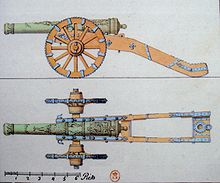 Florent-Jean de Vallière had a son, Joseph Florent de Vallière (1717-1776), who became Commander of the Battalions and Schools of the Artillery in 1747, who persisted in implementing his father's system. From 1763, Gribeauval, as Inspector General of the French Artillery, and second in rank to de Vallière, started efforts to introduce the more modern system that would give France one of the strongest artilleries for the following century.[11]