Dandy (later Dandy Dungeon) is a dungeon crawl computer game for the Atari 8-bit computers. Dandy was one of the first games to offer four-player cooperative play and a built-in editor. It later allegedly served as the inspiration for the popular Atari Gauntlet series.

Dandy took place in a dungeon consisting of a series of 2D mazes drawn in a top-down fashion. The dungeon as a whole had multiple maze levels, connected together using stairwells. Portions of the mazes were also blocked off by locked doors, which could be opened by finding the keys scattered through the maze. The basic goal of the game was to fight through the maze to the next stairwell, from there to the next level, and proceed through the dungeon's levels to the end.

The players were armed with a sort of bow and arrow, which could be shot in any of the eight cardinal directions. Monsters came in several varieties, although the difference was strictly graphical. When hit, the monsters would "devolve" to the next less-powerful state, before eventually being killed and disappearing. Some monsters were placed in the maze during its pre-game creation and appeared as soon as that level was entered, while others were produced in "monster generators", skull-shaped objects placed in various locations.

Monsters touching the player would reduce the player's health, which could be improved by eating food. Food was scattered around the dungeon and was picked up on the way. Potions were also available, which would destroy every monster on the screen when activated. Potions could be either shot with the arrow, or picked up and carried for later use. A special "heart of gold" could also be collected, and used to revive dead party members.

The players interacted with the game primarily through the joystick, although there were a limited number of keys for eating food or using the potions. When two or more players played at once, the screen scrolled according to the average location of the group. This encouraged players to cooperate to explore the dungeon.

The game map was created using a custom character set drawn in the Atari's four-color text mode, moving about as the characters reached the edges of the visible portion of the map. Each dungeon level was three screens wide and high. The Atari's special smooth scrolling hardware was used to pan around the level, while the player/missile graphics capabilities were not used.

The game included a level editor that enabled ambitious players to design new dungeons and exchange them with other players.

What became Dandy was originally written in the fall of 1982 as "Thesis of Terror", Jack Palevich's MIT bachelor's thesis.[1] The original concept was for a five-person game, four players on an Atari computer acting as a graphical terminal, and a fifth acting as dungeon master controlling the action from a separate computer. The two machines would communicate over their serial ports. However, time constraints meant that the interactive dungeon master role was never implemented. The separate machine, a Hewlett-Packard Pascal Workstation (likely an HP 3000), was used solely as a file server, sending new maps to the Atari on demand.

The game engine was inspired by John Conway's Game of Life. Life is cellular automata; at each "turn" the game examines the squares on the grid that makes up the playfield, and uses a basic calculation to determine whether or not that square should hold a cell. In Dandy this same basic mechanism is used, but the decision was essentially "if the player is on that side of the cell, and there is a monster on the other side, then I will hold a monster on the next turn." This gave the illusion of the monsters chasing the player, when in fact they did not move at all. Like a marquee, the motion was an illusion as they simply turned on or off. This algorithm was easy to implement using the limited resources of the Atari 800; it took the same time to run no matter how many monsters were currently in the map. It also had the property that any dungeon that could be drawn in the editor would run correctly and efficiently, the designer did not have to worry about "correct" placement of the monsters or generators to ensure the map would.

The gameplay design of Thesis of Terror was heavily influenced by Dungeons and Dragons; Palevich had never actually played D&D, but he had read through the manuals and watched some of his dorm-mates play campaigns in the lounge of MIT's New House II dormitory. The new name Dandy is a play on the phonetic pronunciation of D and D, which at the time was a generic term for dungeon adventure role-playing games. Dandy was also influenced by the Defender arcade game, which contributed the idea of the smart bomb (potions), and by several maze-exploration arcade games that contributed the idea of using keys to unlock doors. Dandy was not influenced by any of the roguelike games, as Palevich was unaware of Rogue at the time Dandy was designed.

Thesis of Terror's gameplay was designed with help from Joel Gluck, who was a freshman at MIT at the time. Gluck designed several of the levels in the game, and invented some of the common idioms of Dandy-style games. For example, he designed the "funnel trap", where treasure was placed in such a way that the players would run to the treasure, causing a wall of monsters placed just off screen to activate and charge on the party.

Several changes were made to the gameplay as a result of playtesting. Early versions of the game allowed players to shoot each other, but this was removed after testing showed that when the players discovered that they could hurt each other, the game quickly degenerated into a chaotic free-for-all. Another change was that dead players originally had to sit out the rest of the game. Testing revealed that parties would start the game over when one member died, so that the whole party could continue to play together. To keep the game going, the revival heart was added.

After graduating from MIT, Palevich went to work for Atari in the Atari Research division, where he worked on VLSI graphics and sound chips, and also helped design the custom operating system for the unreleased Atari Rainbow personal computer. Of all these projects only the Atari AMY sound chip ended up making it to market.[2]

While working at Atari, Palevich continued developing the game. During the period from February to May 1983 the original was cleaned up for release, and it was during this period that the name became Dandy. The workstation was removed, and the dungeon master's role was reduced to laying out the maps and saving them to floppy disk. Another change was to remove the ability to return to higher levels of the dungeon. This change was made after play-testing revealed that nobody ever went up to previous levels, except by mistake. Removing this feature sped up level changes, because the maze state no longer had to be written out to disk before the next level was loaded. It also enabled the game to work on cassette tape as well as on disk; on the tape version the cassette tape was stopped between levels, and then started up again to load the next level. 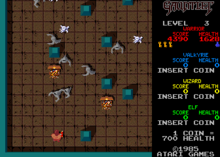 Several years after Dandy was released through the Atari Program Exchange, Atari arcade division programmer Ed Logg and his team wrote Gauntlet. Although Ed has never spoken publicly on the topic, it seems likely that Gauntlet was inspired by Dandy.

In Dandy the players, from one to four, control a character in a scrolling dungeon. Monsters of various types populate the dungeon, spawning from "generators" scattered around the maps. Monsters come in several "versions", and when hit devolve into the next less-powerful version before finally disappearing. Players can collect food to improve their health, and potions for special attacks. Each linearly-ordered level is connected to the one below it by a stairwell symbolized by a ladder.

In Gauntlet the players, from one to four, control characters in a scrolling dungeon. Monsters of various types populate the dungeon, spawning from "generators" scattered around the maps. Monsters come in several "versions", and when hit devolve into the next less-powerful version before finally disappearing. Players can collect food to improve their health, and potions for special attacks. Each randomly-ordered level is connected to the one below it by a stairwell symbolized by an Exit sign.

Where Gauntlet differed from Dandy was in a few specifics. Each of the characters had different style attacks, which now included "melee" attacks in direct contact with the monsters. Additionally, the game included several features designed to suck quarters; for instance, health decreased with time as well as damage, forcing the game to a conclusion even if no damage was taken. Similarly, food had to be eaten immediately, whereas in Dandy it could be saved until it was needed. Dandy's "resurrection heart" feature, which allowed players to bring dead team-mates back to life, was removed.

When Gauntlet was released, John Palevich (who by that time had left Atari) contacted Atari and took legal steps to ensure that he continued to have rights to sell and further develop the original Dandy game. Palevich also requested that his name appear in the Gauntlet credits as the original game designer. Atari demurred on the later point, saying (reasonably) that it would be too expensive to update the ROMs. Atari did give Palevich a full-sized Gauntlet arcade game, however.

Palevich later sold the rights to Dandy to a British game developer, Electric Dreams Software, who released versions for the ZX Spectrum, Commodore 64 and Amstrad CPC in 1986. They chose to make a Gauntlet clone, rather than a Dandy clone, and as a result, the British developer was later sued by Atari.[3]

When Atari decided to re-enter the game console business in the late 1980s, they made a new Dandy-like game known as Dark Chambers. The manual states "Copyright 1983 John Howard Palevich. All rights reserved."[4] Dark Chambers was released for the Atari 2600, Atari 7800 and Atari XE computers in 1988. This version supported only two players as the additional joystick ports had been removed from the 8-bit machines some time earlier.

Palevich has recently been experimenting with re-writing the core Dandy engine in a variety of programming languages. The original version was around 4,000 lines of 6502 assembly language, that took about a hundred hours to write. Cloning the game on a modern computer using C++ took about 1200 lines of code and 12 hours. This makes it a small enough project to be used to compare and contrast the "feel" of various computer languages such as Scheme, C#, F#, and so on. John has released a source-code version of the game for both Microsoft Windows and the Xbox 360.[5]