The university originates in Guerrier's Higher Women's Courses, founded in 1872, and was subsequently reconstituted several times. In 1918 it admitted men and became the Second Moscow State University, then was reformed without its Medical and Chemical Technology schools as the Moscow State Pedagogical Institute, which for a time was known as the Moscow State V. I. Lenin Pedagogical Institute. In 1990, the Institute regained the status of university and thus its present name. 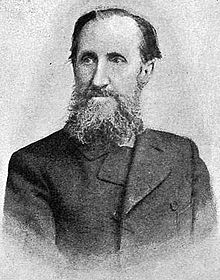 In May 1872 the Russian Minister of Education, Count Dmitry Tolstoy, consented to the opening by Professor V. I. Guerrier of "Higher Women's Courses" as a private educational institution and approved Regulations for this purpose. In November 1872, the first building of the Moscow Higher Women's Courses was opened at Volkhonka, ushering in the era of higher education for women in Russia.[1]

Initially, courses were for two years and were in both humanities and natural sciences. At first, there were two departments, History & Philology and Physics & Mathematics. In Moscow alone, 1,232 women were admitted to the courses between 1872 and 1886.[2]

A female student attending a course became known as a kursistka. While still a young doctor, Anton Chekhov paid for his sister Masha to attend Guerrier courses.[3]

In 1886, the Ministry of Education prevented the admission of new students to Guerrier's courses, and they ended in 1888.

Following the end of the Guerrier courses, Public Lectures for women were organized systematically, most of them given by the same teachers, and in the same premises, as before. The Public Lectures lasted until 1892, when they were closed by the government. From 1886 there were also Collective Lessons, with a bias towards the natural sciences.

In 1900 the title of Moscow Higher Women's Courses was instituted, and in 1906 a School of Medicine was launched. Courses were taught by outstanding scholars. In 1907, educational buildings by the architect Soloviev opened in Little Tsaritsyn Street, now Small Pirogovskay Street. This is now the main building of the Moscow State Pedagogical University. In 1908 came the Anatomical Theatre, now the Russian State Medical University, and the Physical Chemistry Building, now the Moscow Academy of Fine Chemical Technology.

In 1915-1916, the Moscow Higher Women's Courses, sometimes called the Moscow University for Women, received the right of issuing diplomas. By 1918, the institution had 8,300 thousand students and in numbers was second only to the Moscow State University. 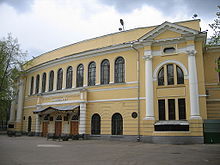 Main building of the University, view from the courtyard

During this period, the staff of the University included Dmitri Ivanovich Sakharov, the father of Andrei Sakharov.[7]

From 1926, the University included a Department of Yiddish Language and Literature, the primary purpose of which was to train teachers for the Soviet Union's Yiddish language primary and secondary schools.[8]

In 1927, day care nurseries for the children of students were in place, and in 1928 new buildings to provide accommodation for 1,000 students were built at a cost of one million Roubles.[9]

From 1924 to 1930, the University's rector was Albert Petrovich Pinkevich, an important educationist and author of The New Education in the Soviet Republic, who became a victim of Stalin's Great Purge, "disappearing" in 1937 to a Gulag labour camp.[10]

By the mid 1930s the Yiddish department, now part of the Institute and headed by Meir Wiener, had become one of the world's leading centres of Yiddish scholarship.[8]

For a time, the Institute took the name of Lenin. In 1960 it was combined with the Moscow City Pedagogical Institute.

In 1967, a Western writer on Russia called the Institute "...probably the most prestigious pedagogical institute in the USSR". Its student body then numbered 10,500.[11]

The Institute regained the title of a University in 1990. In the year 1996-97, it had 12,000 students and six hundred teaching staff with the title of professor. A Bachelor's degree was awarded after four years of academic study, a teaching qualification after five years.[12]

The Seventh International Bakhtin Conference took place at the University in June, 1995.[13]

The Prometei publishing house, of Moscow, sometimes spelt Prometey, is attached to the University.[15]