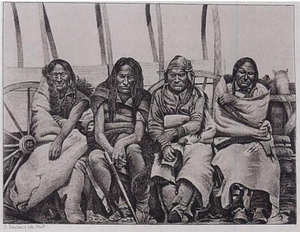 Cheyenne and Arapaho Indian Reservation were the lands granted the Southern Cheyenne and the Southern Arapaho under the Medicine Lodge Treaty signed in 1867. The tribes never lived on the land described in the treaty and did not desire to. Recognizing this fact, on August 10, 1869 lands on the North Fork of the Canadian River were set aside for the tribes by the executive order of President Grant.[1] The lands were located in western Indian Territory south of the Cherokee Outlet and north of the Kiowa-Comanche-Apache-Fort Sill Apache Indian Reservation.[2] However, a portion of it was split off later to form the Caddo-Wichita-Delaware Indian Reservation.[3] The area occupied by the tribes is now referred to as the Cheyenne-Arapaho Oklahoma Tribal Statistical Area.

The last of the buffalo

Following the Red River War nearly all of the Southern Cheyenne and the Southern Arapaho began to live on the reservation, but despite the best efforts of the Indian Agent, John D. Miles, the promised government rations were inadequate and disease affected the tribes. Inadequate funds were appropriated by Congress and only poor quality cattle were available to the government. Thousands of cattle were being grazed illegally on the reservation by Texas cattlemen, but when the Indian agent attempted to buy cattle he was refused. Some cattle were confiscated on promise of payment. On the advice of the army, fearful of an outbreak, ammunition was withheld. The Indians were easy prey for white horse thieves. There was some work for Cheyenne women tanning hides for white traders. In 1875, 1876, and 1877 the tribes competed with white buffalo hunters for the last of the diminishing buffalo herds. Many buffalo were taken, but never enough; by 1877 there were very few left. In the winter of 1877-78 the remaining stragglers of the southern herd were hunted down.[4]

In 1877 nearly a thousand Northern Cheyenne came or were escorted to the reservation from their home ranges in the north. Rations were inadequate as was medical care. In September, 1878 a band under the leadership of Dull Knife and Little Wolf escaped and fled north, the Northern Cheyenne Exodus. Most of the Northern Cheyenne remained, but by 1883 all that wanted to were permitted to return to the north where the Tongue River Indian Reservation was established in 1884.[5]

In the late 1870s and the early 1880s there was some farming by both the Cheyenne and Arapaho with the Arapaho being more enthusiastic and successful. However there were recurrent droughts which resulted in crop failures. It took several years for even the Indian agent and his farmers to understand basic techniques of dryland farming such as conserving winter moisture. There was some work hauling supplies, making hay, and cutting wood. Gradually more children were enrolled in the boarding schools on the reservation and at Carlisle Institute particularly after a separate facility patronized by the Cheyenne was established in Caddo Springs. However there was little work even for the Carlisle graduates. The Indian agent's promising attempt to build a cattle herd was aborted when the Office of Indian Affairs commanded distribution of the herd giving each Indian an average of three cattle, which predictably they did little with. Shortages of rations continued with few resources available to the Indian agent to provide work opportunities for his charges.[6]

During the early 1880s the vast majority of the reservation was licensed for grazing to large cattle outfits in 8 large parcels at the rate of 2 cents per acre, about a third of the fair market price. They were not leases as an actual lease of reservation land was forbidden by law. Miles, the Indian agent, called a council of chiefs and cattlemen on December 12, 1882 to consider grazing permits, and believed he had obtained the consent of the vast majority of the representatives of the tribes. There was however, strong opposition, particularly among the Cheyenne camped at Cantonment who responded with both killing of cattle for food and cultural resistance by the soldier societies which began requiring participation in medicine ceremonies and punishing Cheyenne who farmed or sent their children to school. Miles resigned on March 31, 1884. Miles replacement, D. B. Dyer, neither respected the Cheyenne nor got on well with them. His approach to disorder was to request troops, which were not provided. Escalating conflict continued between Indians and the cattlemen and in July, 1885, by the presidential order of Grover Cleveland, the cattlemen were ordered off the reservation, the reservation placed under military control, and Dyer was replaced by an army officer, Captain Jesse M. Lee.[7]

The lands granted by the Treaty of Medicine Lodge were extensive, setting aside a substantial portion of western Oklahoma for the exclusive use of the Cheyenne and Arapaho. "...The United States now solemnly agrees that no persons except those herein authorized so to do, and except such officers, agents, and employés of the Government as may be authorized to enter upon Indian reservations in discharge of duties enjoined by law, shall ever be permitted to pass over, settle upon, or reside in the territory described in this article...."[8] In 1890, the United States, operating through the agency of the Cherokee Commission, acting under the provisions of the Dawes Act, broke the treaty and took most of the lands on the reservation and sold them to settlers, allotting a small parcel to each individual Indian. It was believed by the government at the time that extinguishment of tribal government and of a tribal interest in land would benefit the Indians and make possible their integration into American society.[9] The allotments were held in trust by the Bureau of Indian Affairs which leased much of that land to settlers. This process took several years, but by 1910 nearly all the lands of the reservation were in the possession or control of settlers, leaving the Indians a small minority on the reservation in possession of only a small portion of their original lands. At noon April 19, 1892 ,the lands of the Cheyenne and Arapaho reservation were opened for settlement by homesteaders; the Indians retained 529,962 acres (2,144.68 km2) located mostly along the North Fork of the Canadian River, the Canadian River, and the Washita River.[10][11][12] 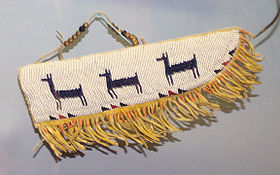 The Cheyenne are a Plains Tribe in Oklahoma and are of the Algonquian language family. They have long been associated with the Arapaho. The two tribes are referred to in Oklahoma as the Southern Cheyenne and the Southern Arapaho, a reference intended to distinguish them from their respective northern divisions on reservations in Montana (Northern Cheyenne Indian Reservation) and Wyoming (Wind River), respectively. The southern bands moved to the Indian Territory as a result of the Medicine Lodge Treaty of 1867,[13] which was signed by Chief Little Raven as leader of the Southern Arapaho.[14] 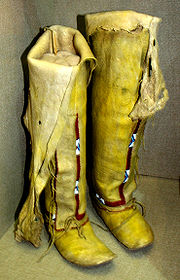 In Oklahoma, the Arapaho live mostly in rural areas near the towns of Canton, Greenfield and Geary in Blaine County, and at Colony in Washita County. The name Arapaho originates in the Pawnee term tirapihu (or larapihu), meaning, "He buys or trades", probably due to their being the dominant trading group in the Great Plains region. The Arapaho call themselves Inun-ina meaning "our people" or "people of our own kind."

The Arapaho are one of the westernmost tribes of the Algonquian language family. Members of the Northern Arapaho who live on the Wind River Indian Reservation in Wyoming call the Oklahoma group Nawathi'neha or "Southerners."