Checking whether a coin is fair

Checking whether a coin is fair

In statistics, the question of checking whether a coin is fair is one whose importance lies, firstly, in providing a simple problem on which to illustrate basic ideas of statistical inference and, secondly, in providing a simple problem that can be used to compare various competing methods of statistical inference, including decision theory. The practical problem of checking whether a coin is fair might be considered as easily solved by performing a sufficiently large number of trials, but statistics and probability theory can provide guidance on two types of question; specifically those of how many trials to undertake and of the accuracy an estimate of the probability of turning up heads, derived from a given sample of trials.

A fair coin is an idealized randomizing device with two states (usually named "heads" and "tails") which are equally likely to occur. It is based on the coin flip used widely in sports and other situations where it is required to give two parties the same chance of winning. Either a specially designed chip or more usually a simple currency coin is used, although the latter might be slightly "unfair" due to an asymmetrical weight distribution, which might cause one state to occur more frequently than the other, giving one party an unfair advantage.[1] So it might be necessary to test experimentally whether the coin is in fact "fair" – that is, whether the probability of the coin falling on either side when it is tossed is approximately 50%. It is of course impossible to rule out arbitrarily small deviations from fairness such as might be expected to affect only one flip in a lifetime of flipping; also it is always possible for an unfair (or "biased") coin to happen to turn up exactly 10 heads in 20 flips. As such, any fairness test must only establish a certain degree of confidence in a certain degree of fairness (a certain maximum bias). In more rigorous terminology, the problem is of determining the parameters of a Bernoulli process, given only a limited sample of Bernoulli trials.

Both methods prescribe an experiment (or trial) in which the coin is tossed many times and the result of each toss is recorded. The results can then be analysed statistically to decide whether the coin is "fair" or "probably not fair". It is assumed that the number of tosses is fixed and cannot be decided by the experimenter.

An important difference between these two approaches is that the first approach gives some weight to one's prior experience of tossing coins, while the second does not. The question of how much weight to give to prior experience, depending on the quality (credibility) of that experience, is discussed under credibility theory.

One method is to calculate the posterior probability density function of Bayesian probability theory.

A test is performed by tossing the coin N times and noting the observed numbers of heads, h, and tails, t. The symbols H and T represent more generalised variables expressing the numbers of heads and tails respectively that might have been observed in the experiment. Thus N = H+T = h+t.

Next, let r be the actual probability of obtaining heads in a single toss of the coin. This is the property of the coin which is being investigated. Using Bayes' theorem, the posterior probability density of r conditional on h and t is expressed as follows:

where g(r) represents the prior probability density distribution of r, which lies in the range 0 to 1.

Substituting this into the previous formula:

This is in fact a beta distribution (the conjugate prior for the binomial distribution), whose denominator can be expressed in terms of the beta function:

As a uniform prior distribution has been assumed, and because h and t are integers, this can also be written in terms of factorials:

The graph on the right shows the probability density function of r given that 7 heads were obtained in 10 tosses. (Note: r is the probability of obtaining heads when tossing the same coin once.) 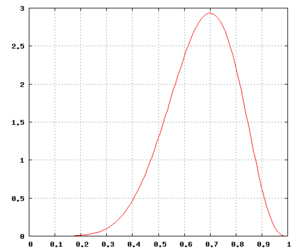 Using this approach, to decide the number of times the coin should be tossed, two parameters are required:

where n is the number of trials (which was denoted by N in the previous paragraph).

And hence the value of maximum error (E) is given by

Solving for the required number of coin tosses, n,

1. If a maximum error of 0.01 is desired, how many times should the coin be tossed?

2. If the coin is tossed 10000 times, what is the maximum error of the estimator

on the value of

(the actual probability of obtaining heads in a coin toss)?

(the true probability of obtaining heads) lie within if a confidence level of 99.999% is desired?

Now find the value of Z corresponding to 99.999% level of confidence.

The interval which contains r is thus:

Hence, 99.999% of the time, the interval above would contain

which is the true value of obtaining heads in a single toss.

Other approaches to the question of checking whether a coin is fair are available using decision theory, whose application would require the formulation of a loss function or utility function which describes the consequences of making a given decision. An approach that avoids requiring either a loss function or a prior probability (as in the Bayesian approach) is that of "acceptance sampling".[2]

The above mathematical analysis for determining if a coin is fair can also be applied to other uses. For example: