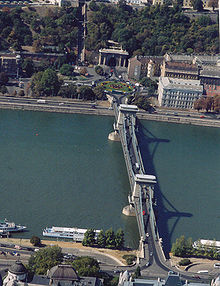 Aerial view of the Chain Bridge

The Széchenyi Chain Bridge (Hungarian: Lánchíd) is a suspension bridge that spans the River Danube between Buda and Pest, the western and eastern sides of Budapest, the capital of Hungary. It was the first permanent bridge across the Danube in Budapest, and was opened in 1849.

It is anchored on the Pest side of the river to Széchenyi (formerly Roosevelt) Square, adjacent to the Gresham Palace and the Hungarian Academy of Sciences, and on the Buda side to Adam Clark Square, near the Zero Kilometer Stone and the lower end of the Castle Hill Funicular, leading to Buda Castle.

The bridge has the name of István Széchenyi, a major supporter of its construction, attached to it, but is most commonly known as the Chain Bridge. At the time of its construction, it was regarded as one of the modern world's engineering wonders.[citation needed] It has asserted an enormous significance in the country's economic, social and cultural life, much as the Brooklyn Bridge has in New York and America. Its decorations made of cast iron, and its construction, radiating calm dignity and balance, have elevated the Chain Bridge to a high stature in Europe. It became a symbol of advancement, national awakening, and the linkage between East and West.

Laying the foundation-stone for the bridge (painted by Miklós Barabás, 1864)

It was funded to a considerable extent by the Greek merchant Georgios Sinas who had considerable financial and land interests in the city and whose name is inscribed on the base of the south western foundation of the bridge on the Buda side.

The bridge was opened in 1849, and thus became the first permanent bridge in the Hungarian capital, after the Hungarian Revolution of 1848. At the time, its center span of 202 metres (663 ft) was one of the largest in the world. The lions at each of the abutments were carved in stone by the sculptor, Marschalko János [2]. They are visibly similar in design to the famous bronze lions of Trafalgar Square by Edwin Henry Landseer with Marochetti (commissioned 1858, installed 1867), but they were earlier - installed 1852 [3]. They are also smaller (and appear from below to lack tongues). The bridge was given its current name in 1898.

It was designed in sections and shipped from the United Kingdom to Hungary for final construction.

The bridge's cast iron structure was updated and strengthened in 1914. In World War II, the bridge was severely damaged during Siege of Budapest, and was rebuilt and reopened 1949.

In 2001, Hungarian stunt pilot Péter Besenyei flew upside down under the bridge, a maneuver that became a standard in Red Bull air races today. The bridge is featured in the 2002 movie I Spy. Also, in Katy Perry's music video Firework, it is featured at the beginning.

The inscription on each side of the bridge is to Clarke Adam, a Hungarian name using Eastern Name Order, one of very few English names that have been placed in that order.

A plaque on the Pest side of the river reads "To commemorate the only two surviving bridges designed by Willian Tierney Clarke: The Széchenyi Chain Bridge over the Danube at Budapest and the suspension bridge over the Thames at Marlow, England."