Margaret Kelly was born in Dublin on 24 June 1910 at the Rotunda Hospital. She never knew her parents. An Irish priest entrusted her to Mary Murphy, a spinster who worked at home as a dress maker. In 1916, following the Easter uprising, both moved to Liverpool, where, on the direction of a doctor, Kelly was registered in a dance class to strengthen her frail legs. Quickly, it appeared that she had a great talent.

At the age of fourteen, Kelly left school and joined a Scottish dance troupe, the Hot Jocks.[1] Nine months later Alfred Jackson, a famous producer who ran teams of precision dancers, the Jackson Girls engaged her at the Scala in Berlin. Kelly danced there for 5 years.

In 1930 Kelly danced in Paris at the Folies Bergère and, decided to remain there. In 1932, when she was 22, she created there her own group called the Bluebell Girls, they are still dancing today in the Lido in Paris. This is an unmatched world record of longevity in the history of show business.[citation needed]

In 1939, she married Marcel Leibovici, a Romanian Jew, pianist and composer at the Folies Bergère. During the Second World War, they had two sons: Patrick (1939) and Francis (1941). After the German invasion of 1940, Margaret, pregnant with Francis, was arrested by the French police and interned in Besançon. The Irish chargé d'affaires, Count O'Kelly, saved her. But in 1942, Marcel, her husband, was arrested in his turn and deported to the camp of Gurs. The French Resistance helped him to flee and go back to Paris. He was hidden by his wife opposite the Prefecture of Police building until the Liberation. During this time, Margaret ensured him food and security at the risk of her life. She was interrogated by the Gestapo, which suspected her of hiding her husband, but succeeded, in spite of intensive questioning, to never give herself away thanks to her self control and her quickness at repartee.[2][3] François Truffaut's film, The Last Metro, is inspired by this episode in the life of Margaret Kelly and her husband Marcel Leibovici. 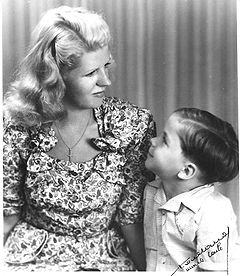 Margaret Kelly with her son Francis 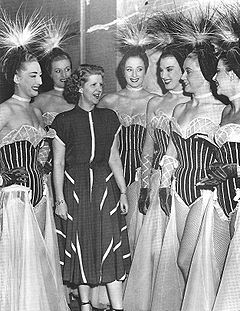 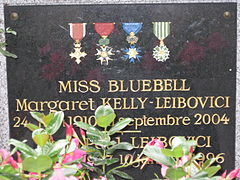 After the war, Margaret started a very fruitful collaboration with Donn Arden, the American choreographer and producer, to give shows at the Paris Lido. While beginning with a modest contract in 1947, the Bluebell Girls became the sole stars of the Lido shows and became increasingly more famous. Their shows were different from the others; Bluebell had an inventory of the tallest and most beautiful dancers who, with their costumes and high heels, towered over everybody on stage. Donn Arden's shows differentiated themselves from the others by the mixture of movement, colour, music and light in a kaleidoscope of impetuous rhythm. By the end of the 1950s, the Bluebell Girls had also really become a worldwide organization.[4] Their base in Paris was supplemented by what had become permanent troupes, for example in Las Vegas, while at any moment, in any part of the world — Europe, Africa, the Far East — the Bluebell Girls appeared in the schedule of the tours. From 1974, the two shows at the MGM Grand Hotel in Las Vegas, "Hallelujah Hollywood" and "Jubilee!" carried the troupe to the height of its fame.

From 1947, Marcel Leibovici had entered in full partnership with his wife, running the orchestrations, business and financial side of her operation and, thanks to his considerable flair, had made the Bluebell Girls the most celebrated and prestigious dancing troupe in the world. Marcel died in a car accident in 1961. The disappearance of the motive force behind its commercial success could have marked the end of the Bluebell Girls[citation needed]. Nevertheless Bluebell had become wholly responsible for the four children: Patrick, Francis, Florence and Jean-Paul, never married again and kept the Bluebell's programme going and even increased the number of her troupes and her activities, by always adding new elements and new artists. One of the most famous innovations was the introduction of the "topless" in 1970. Miss Bluebell invented the untouchable «showgirl», the accomplished woman and very versatile artist, aware of being the member of a disciplined, rigorous and perfectionist troupe.

She refused the beautiful but insipid dancer, preferring the girl with a character, capable of expressing what was unique in her.

In 1984, Bluebell went into semi-retirement and left the Paris Lido, but she continued her global activities, particularly in Las Vegas with the MGM Grand Hotel. The Paris Lido bought her brand name Bluebell Girls to be allowed to continue its use in the shows. Miss Bluebell devoted a lot of her time and money for charities, but she was also known from her exemplary attitude towards her handicapped granddaughter Alexandra (Angelman Syndrome). Bluebell had the very therapeutic attitude not to exclude her, but to invite her every weekend to the very posh restaurants and to have her admitted by her professional and social circle of acquaintances.[citation needed]

In 1986 the BBC broadcast a major drama series called Bluebell[5] produced by Richard Bates and George Perry wrote her authorized biography. Carolyn Pickles played her part. Both biography and BBC drama series were a global success, with the sole exception of France where there has been neither a broadcasting of the drama series nor a publishing of the biography.

Within the framework of its mission to present the history of entertainment of the capital of this art the University of Nevada in Las Vegas (UNLV) is paying a permanent tribute to Miss Bluebell by showing photographs of her at the same time in its on-line Exhibit of photos SHOWGIRLS and in the famous Donn Arden Special Collection, thus reuniting for ever the two partners who played such a signature role in the history of show business and contributed so much to the legend of the Bluebell Girls.

In 1987, the British sculptor Doreen Kern realized Miss Bluebell's life-size bronze portrait bust, it was placed on her tomb (and stolen on 18 July 2008).[citation needed].

In 1990, Bluebell was granted a private audience by Pope John Paul II.

The eight last years (1996–2004) of Miss Bluebell's life were darkened by a conflict between her children relating to the assumption of her responsibility and managing her estate. In 1996, she was placed under French guardianship and she obtained the assurance to remain in her Parisian apartment according to her wish and to continue to be followed by the best medical specialists in Paris.

She is buried in the Montmartre Cemetery. Her son Jean-Paul, who died in 1996, is interred with her.