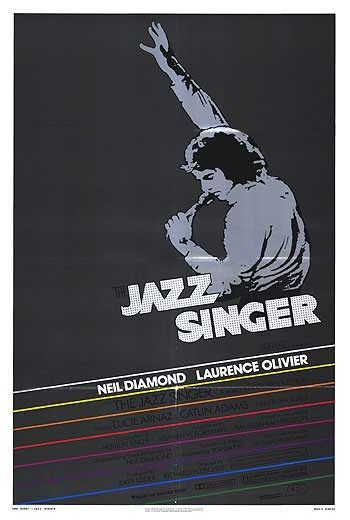 Neil Diamond was praised and panned, nominated for both the Golden Globe Award for Best Actor and a for his role, of which he won the latter. Despite producing three hit songs, "America", "Love on the Rocks" and "Hello Again", none were nominated for an Oscar.

The soundtrack was enormously successful, eventually reaching platinum status. The film is commonly considered a flop ($27 million in grosses), though it made more money at the box office than other eventual Oscar nominees "" ($22 million), "The Elephant Man", "" or "".

For a number of years, the video rights in the were owned by (under license from EMI film library holder ). WB had produced the original 1927 version, as well as the 1952 remake. The US rights to the film are now held by Diamond's company, , with handling DVD distribution.

In New York City, Jess Robin (Neil Diamond), whose real name is Yussel Rabinovitch, is a young Jewish cantor performing at the synagogue of his imperious father (Sir Laurence Olivier). Yussel is married to his childhood sweetheart, Rivka, and has settled down to a life of religious devotion to the teaching of his faith.

But on the side, he writes songs for a black singing group, and when a member of the quartet gets in trouble with the law, Yussel covers for him at one of their gigs by wearing . The nightclub engagement is a success, but the emcee at the nightclub notices that Yussel's hands are white and calls him out. A fight ensues and the band is arrested. Yussel's father comes to the jail to bail them out, but finds there is not a Yussel Rabinovitch there, only a Jess Robin. His son explains it is just a stage name he uses when performing. His father reminds him that his singing voice was to be used for God's purposes, not his own. Yussel/Jess decides to relent and do whatever his father wants...at least for now.

Yussel's best friend, a member of the "Four Brothers" signing group, Bubba (), informs him that the band got a gig in Los Angeles performing backup vocals for Keith Lennox (). Shortly after Bubba leaves, Yussel begins composing a song that would eventually become "." His wife Rivka () notices him writing the song in his free time and senses that Yussel yearns for a bigger stage for his voice, but her values keep her grounded to the home life they have built together.

Bubba calls from Los Angeles to inform him that Keith Lennox really loved "Love on the Rocks" and wants to record it, but they need Yussel to come out for a week to oversee the recording session. This is the opportunity he has been waiting for, but Yussel's wife and father are opposed to him going. At a party at their synagogue, his father relents and lets him go.

In his professional identity as "Jess", he is met in L.A. by music agent Molly Bell (Lucie Arnaz). She takes him to the studio where Keith Lennox is recording, and Jess is shocked to find out that his ballad is being recorded as a hard rock song. During a break in recording, Jess asks the producer and Lennox if he can perform the song as intended. They allow him to do so and while recording, Molly realizes that Jess' performance is the proper way. Lennox is not so easily swayed and fires the group (and eventually Molly as well).

Molly gets a tip from a friend as to where booking agent Eddie Gibbs () is having lunch. She asserts herself in his car as a mugger (holding the tape in her jacket pocket as though concealing a gun) and makes him listen to a recording of Jess' "Love on the Rocks". When Eddie asks who it is, Molly tells him that it is the new opening act for comedian Zany Gray's (Mike Pasternak) new television special. Gibbs is not amused. He says he can't book anyone sight unseen and promptly throws Molly out of his car. However, she persuades Eddie to come to a club where Jess has managed to get a gig, thanks to Bubba who was working there as a waiter. Eddie watches for only a few moments and leaves. Jess thinks he has a blown it. Molly tells him, "He hates loud music...you he loved. You open for Zany Gray next week."

Meanwhile, back in New York City, Cantor Rabinovich confronts Rivka about Jess going to California and reminds her that her place is by her husband's side. If she travels to California maybe she can bring him home. She relents and goes.

On Jess' opening night, he begins with a small harmonica intro and is heckled by someone in the crowd ("Is that all you can play, turkey?!") but he endures and performs "Summer Love." The audience applauds and Jess decides to perform a song everyone can get in on, "Hey Louise." Rivka shows up and meets Molly. Rivka tries to explain that their Jewish values are so tightly adhered to that Jess cannot possibly stay. She also senses Molly's attraction to her husband. Molly tells Rivka that she is not the problem, but the audience is. Jess ends his set and is given a standing ovation.

He heads backstage and is reunited with Rivka. Molly makes herself scarce. At the aftershow party in Jess' dressing room, Jess is given a recording contract. However, he and Rivka have an argument outside his dressing room where his wife warns him it's either her or his new life. He tries to convince her to stay, but Rivka feels she has lost him forever and runs off.

Jess finds he has developed feelings for Molly. A montage ensues that shows their relationship developing, including a scene where Molly makes Jess a nice ham dinner, completely forgetting that he is Jewish and doesn't eat pork products. The two make love and he writes "Hello Again" for her.

His father comes to see Jess where he is living with Molly in to get Jess his son to come back to New York where he belongs. Jess tells him he and Rivka will be divorced. They are interrupted when Molly enters and Jess introduces her. Anguished, his father then performs keriah (the tearing of a piece of clothing over the heart) and says, "I have no son." Molly asks Jess why his father tore his clothing and Jess explains that the act is one of mourning someone who has just died. When Molly asks "Who's dead?", Jess replies, "I am."

In the recording studio, Jess along with Bubba and the Four Brothers are cutting the song "Jerusalem". Jess is distracted by the incident with his father and takes his anger out on the band. During a break, Bubba finds out from Molly she is pregnant. He warns her not to tell Jess right now. The recording session goes from bad to worse. Jess gets so upset, he leaves the studio and drives off in anger. Bubba tries to follow but Molly tells him to just let Jess work things out on his own.

Jess keeps driving until his car runs out of fuel. He hitchhikes and winds up spending the next several months on the road. He ends up at a small country bar, where he is hired to sing. Bubba tracks him down and tells Jess of the birth of his son, Charlie Parker (Chaim) Rabinovitch. Jess returns to Venice Beach and to Molly.

Hoping to revive Jess's career, Molly again sneaks into Eddie's car. He is not easily swayed, even though Jess's debut album did go gold and "probably paid for this car", Molly reminds him. Eddie gives in and allows Jess to perform one number at "Zany Gray's Autumn in New York" concert.

In New York City at the rehearsals, Jess is met by a friend of his father's, Leo (), who explains that the doctors won't let Cantor Rabinovitch sing the on due to his high blood pressure. He asks if Yussel could come to the service to be cantor and hopes that it will breach the distance between father and son. Jess initially says no, but is convinced by Molly that he should.

On Yom Kippur, a time for atonement, Jess steps in aside the synagogue cantor to sing the Kol Nidre. His father looks up in shock. After the service, Jess confronts his father and shows him a picture of his grandson. With that, Cantor Rabinovitch forgives his son and the two embrace.

At the concert, Jess opens the show with "America" accompanied by a full orchestra. He basks in the glow of a standing ovation he receives - including from his father, who is sitting next to Molly.