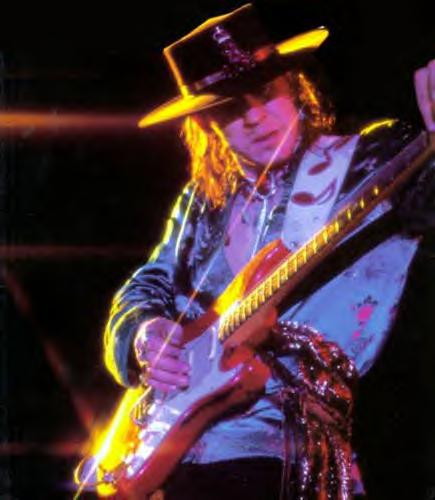 Stephen "Stevie" Ray Vaughan (, ndash , ) was an American , whose broad appeal made him an influential guitarist. [ [http://www.bluepower.com/2007/08/bluepower-presentsinfluential_27.html Bluepower.com] , Retrieved ] In 2003, "" magazine ranked Stevie Ray Vaughan #7 in its list of the 100 Greatest Guitarists of All Time, [cite web |title=100 Greatest Guitarists of All Time |work=Rolling Stone Issue 931 |publisher=Rolling Stone |url=http://www.rollingstone.com/news/story/5937559/the_100_greatest_guitarists_of_all_time] and "Classic Rock " Magazine ranked him #3 in their list of the 100 "Wildest Guitar Heroes" in 2007.

Vaughan was born on , , in Dallas, , and was raised in the city's neighborhood. Neither of his parents had any strong musical talent but were avid music fans. They would take Vaughan and his older brother Jimmie to concerts to see , , , and .

Even though Vaughan initially wanted to play the drums as his primary instrument, gave him a guitar when he was seven years old. Vaughan's brother, , gave him his first guitar lessons. Vaughan was later quoted in "" as saying, "My brother Jimmie actually was one of the biggest influences on my playing. He really was the reason I started to play, watching him and seeing what could be done."Fact|date=June 2007 He played entirely by ear and never learned how to read sheet music. By the time he was thirteen years old he was playing in clubs where he met many of his blues idols. A few years later he dropped out of Justin F. Kimball High School in Oak Cliff and moved to Austin to pursue music. Vaughan's talent caught the attention of guitarist and blues-club owner .

During the early 1970s Vaughan played the Austin bar and club scene with the Cobras. After the Cobras broke up, in 1975 he started Triple Threat, which in 1978 became Double Trouble with Vaughan as lead singer. From Austin, their success spread throughout Texas.

In the early 1980s, and saw Vaughan and Double Trouble playing at a club, and invited them to play at a private party in New York. This led to their acquaintance with producer , who managed to get them their first big break performing at the 1982 . [Prown, Pete, and Newquist, HP (1997). "Legends of Rock Guitar: The Essential Reference of Rock's Greatest Guitarists", p. 217. Hal Leonard. ISBN 0793540429.] As a result they were able to meet , who gave the band free time in his Los Angeles studio, and , who had Vaughan play lead guitar on his next album, "Let's Dance".

and took a toll on Vaughan by mid-1986. and whiskey were his drugs of choice. Vaughan would dissolve cocaine in his whiskey for a morning "pick-me-up". Doctors later discovered that this morning ritual was causing severe ulcerations of the stomach lining. Nevertheless, he carried on and put out "Live Alive" in 1986 and did a concert tour in America in 1987. [ [http://www.answers.com/topic/stevie-ray-vaughan?cat=entertainment Who2 Biography, Answers.com Entertainment] ] After becoming acutely ill in Germany while on tour, Vaughan managed to struggle through three more shows, but was soon admitted into a hospital in . Dr. Victor Bloom, who had helped and with their addictions, told Vaughan that if he had not come to the hospital he would have died in a month. After a struggle to get sober in London, he then flew to , to a rehabilitation center. He eventually recovered fully from his addictions in the program of .

Upon his return from rehab, Vaughan worked with a number of artists including (making a cameo appearance as himself performing a duet of "Pipeline" with Dale in the movie "", which was then released as a single), , and (playing "Superstition" on the MTV special "Stevie Wonder's Characters").

In 1988, Vaughan continued to tour with Double Trouble throughout and performed at . [ [http://www.answers.com/topic/stevie-ray-vaughan?cat=entertainment Who2 Biography, Answers.com Entertainment] ] Vaughan and Double Trouble recorded "" in February 1989, their fourth studio album, which was praised by someFact|date=July 2008 as the band's best work since "Texas Flood". The album won a . Vaughan shared a headline tour with guitarist in the fall of 1989. In his beloved Austin, the "Live Music Capital of the World," Vaughan was presented with a proclamation from the mayor declaring , "Stevie Ray Vaughan Day."

On , , Vaughan gave a speech and addressed the Aquarius Chapter of . On , Vaughan made his first appearance on "" in . It was originally scheduled for Vaughan to do a closing jam with , but Vaughan said he had to leave right away.

Vaughan had spoken two years earlier about wanting to help produce an album with his brother, Jimmie Vaughan. That time came in March 1990, when the Vaughan Brothers went to work at the Dallas Sound Lab, the same studio used to record "Soul to Soul."

Around this time, Vaughan said that singing was becoming painful for him due to a condition he called "hamburger throat." He received to his neck, but still had to take shots to relieve the pain, which caused his face to swell.

On and , , Vaughan and finished the summer portion of the with shows at , just outside of . The show also featured & His Memphis Horns, and , who played the closing set, also bringing all the musicians back onstage for an encore jam.

Double Trouble drummer recalls his last conversation with Vaughan backstage. He then remembers Vaughan saying he had to call his girlfriend, Janna Lapidus, in Chicago, before heading out the door to the helicopters, which had been arranged for flight (through Omni Flights) by Skip Rickert, Double Trouble's tour manager.

The musicians had expected a long bus ride back to Chicago. However, Vaughan was informed by a member of Clapton's crew that three seats were open on one of the helicopters returning to Chicago with Clapton's crew, enough for Vaughan, his brother Jimmie, and Jimmie's wife Connie. It turned out there was only one seat left; Vaughan requested it from his brother, who obliged. At 12:44 a.m. pilot Jeffrey Browne guided the helicopter off the ground. Moments after takeoff the helicopter crashed into a ski slope and all five on board were killed. Although the crash occurred only 0.6 miles from takeoff, it went unnoticed by those at the concert site.

The search for the wreckage began at 5:00 a.m., finally being located two hours later with the help of its locator beacon. [ [http://www26.brinkster.com/jakapa/srv/death.htm Obituary from People magazine] ] The cause of the crash was believed to be pilot error. [ [http://www.ntsb.gov/ntsb/GenPDF.asp?id=CHI90MA244&rpt=fi National Transport Safety Board Accident Brief] ] [ [http://www.check-six.com/lib/Famous_Missing/Celebrity_Plane_Crashes.htm Celebrity Plane Crashes] ] Chris Layton and Jimmie Vaughan did not find out about the crash until they returned to their motel in Chicago. The following morning Jimmie Vaughan was called to identify the body of his brother. The coroner's report stated that the cause of death was caused by severing of the aorta. The severance was caused by high deceleration during crash impact.

The 1991 album "The Sky Is Crying" was the first of several posthumous Vaughan releases to achieve chart success. Jimmie Vaughan later co-wrote and recorded a song in tribute to his brother and other deceased blues guitarists, entitled "".

Many other artists recorded songs in remembrance of Vaughan, including , [Entitled "SRV", from the album ""] and ("Jibboom" on the album "", 1999).

In 1992, the released the , which Vaughan had helped design. As of 2007, the model is still in production. In 2004, Fender also released a limited edition exact replica of "Number One". [http://www.stevieray.com/srv-strat.htm StevieRay.com - Fender] ]

included a song on his 1995 live album "" entitled "Stevie Ray Blues". On the album, Wonder refers to the song as "Stevie Ray Vaughan Blues".

's short story "" concerns a small town called Rock and Roll Heaven that's populated by late rock musicians, one of whom is Vaughan.

In 2000, Stevie Ray Vaughan was inducted into the .

The last guitar that Vaughan played before his death is on display in the in .

In November 2007, released a second tribute to Vaughan, an exact replica of his second beloved guitar: Lenny. This guitar was given to him by his wife Lennora ("Lenny") on his 26th birthday and Vaughan was very fond of it. According to Fender, the original Lenny was a 1965 Strat that he saw in the window of a pawn shop that he was unable to afford. The guitar is sold with a strap, a case with Vaughan's name embroidered in the fabric lining, a number of brochures and memorabilia and a leather bound certificate of authenticity.

In 2008, residents voted to rename Dallas' Industrial Boulevard, with Vaughan's name being one of the finalists alongside , , and . [http://www.dallasnews.com/sharedcontent/dws/dn/latestnews/stories/043008dnmetindustrialnm.339c00c.html]

Vaughan's blues style was strongly influenced by many blues guitarists. Foremost among them were , who dubbed himself Stevie's "godfather," , , and . The song "Rude Mood" is a direct derivative (according to Vaughan himself) of a tune called "Lightning Sky Hop." He was also strongly influenced by early guitarist , who, according to Vaughan, "really taught me to play guitar from the heart" (Davis, "History of the Blues", DaCapo 2003, p. 246). Vaughan, who had idolized Mack since childhood, produced and played on Mack's 1985 album "Strike Like Lightning" [cite web |url=http://www.answers.com/topic/strike-like-lightning |title=Strike Like Lightning] and covered two Mack tunes from the early 1960s, "Wham!" and "Chicken-Pickin'" (which Vaughan renamed "Scuttle-Buttin',") as well as a Mack tune from the 1980s, "If You Have To Know." Vaughan's brother Jimmie Vaughan has stated that was the guitarist he and Stevie studied the most.

Vaughan's sound and playing style, which often incorporated simultaneous lead and rhythm parts, drew comparisons to Hendrix; Vaughan covered several Hendrix tunes on his studio albums and in performance, such as "," "," and "Third Stone from the Sun." Some blues greats say that "Vaughan can play Hendrix better than Hendrix himself." He was also heavily influenced by , another Texas bluesman, mainly in the use of tone and attack; King's heavy can clearly be heard in Vaughan's playing. Another stylistic influence was . By utilizing his index finger as a pick a la Albert Collins, he was able to coax various tonal nuances from his s.

Known for his warm blues-rock tone, Vaughan characteristically used very heavy strings on his guitar ranging from 13 to 56-gauge sets to give a fuller sound which he tuned down a half-step to the key of .

Vaughan is recognized mainly for using s that were strung with heavy strings, and for tuning his guitars a half-step down from standard pitch (also known as E-flat).

In his estate, Vaughan had a total of 34 guitars that he used throughout his career. For more information, see .

Stevie always used amplifiers that he set at loud volumes. This allowed the amps to go into "overdrive," usually power amp distortion, for his well-known clean, but loud tone. For more information on his configurations and customizations to his amps, see .

He usually set the Tube Screamer with the "Drive" knob low, but tone and level high as a "boost" for leads.

Stevie used a Leslie-style speaker cabinet called a , but had a rotating styrofoam cone with 2 slots in the sides around a stationary speaker. This made the guitar sound like an organ, and can be heard on "Cold Shot" from "".

Vaughan briefly used a in 1986, but preferred the effect given by the Vibratone.

A "Hot Cake" overdrive pedal was also briefly in his collection (similar to the Tube Screamer), as well as an Electro-Harmonix Hot Tubes overdrive pedal.

He also had a before he got the Vox wah-wah.

The strings Stevie used didn't necessarily have to be a particular brand name, but he is known for using GHS Nickel Rockers. He changed gauges around often, depending on the condition of his fingers.

In the early 1980s, he would pick up Fender Mediums as "freebies" whenever he could. However, Stevie's picks were custom-made "multi-color" equivalents of Fender Mediums, starting in 1984. He did try D'Addario Delrin Heavies (1.10 mm) in 1987. Stevie held his picks sideways.