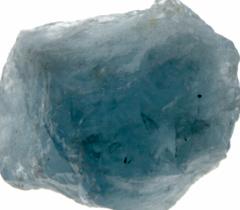 "Aquamarine" is an American 2006 film starring Joanna "JoJo" Levesque, and . The film was released in on , . The movie, loosely based on a children's book on the same name by , and directed by American Director Elizabeth Allen was filmed in ,

Two teenage best friends, Claire () and Hailey (Joanna "JoJo" Levesque) regret that they will be separated in five days, since Hailey has to move to because of her mother's job. One night, after a violent storm they find a , named () in the swimming pool of their beach club. The girls are frightened at first, but then curious. They start to talk with Aquamarine and promise her they will be back in the morning.

When they return, they find Aquamarine in the beach's snack shack, but with a human body instead of a mermaid's. Aquamarine tells them she can assume human form on land during the day if she does not get wet. Claire and Hailey befriend Aquamarine, who tells them that she came to land to find love, an idea she knows nothing about, but desires desperately. She tells them that she made a deal with her father: if she finds love in three days, she will not undergo an . She immediately notices a handsome lifeguard named Raymond () and enlists the help of the two girls to win his in return for the granting of a wish. The girls see their opportunity to keep Hailey from moving and immediately start helping her.

Claire and Hailey's rival &mdash; a spoiled, rich girl, Cecilia () &mdash; tries her best to stop them, but fails. Also prominent is an eccentric, ate caretaker, Leonard, who rescues Aquamarine from public discovery. Eventually, it is not Raymond that convinces Aquamarine that humans can love, but Claire and Hailey, who are willing to give up their wish and their lives in the aiding of a . Raymond and Aquamarine share a kiss and promise to meet up again in the future, Raymond promises he'll wait for her. Hailey and Claire get their wish from Aquamarine, but decide not to use it until later.But it is mentioned that they plan to use it to make sure all three of them can visit each other every summer.

The movie, which is set in , was filmed in , with some scenes filmed at marine park in Gold Coast. Various background items and props give away the location, just as the magazines read by the girls in the film.

The producers only employed actors from the ; the actors who portrayed Hailey, Claire, Aquamarine, Cecilia and Raymond. The rest were Australian actors, some of whom are well-known in Australia. Roy Billing and , who play Claire's grandparents, have had long distinguished acting careers. , who plays Hailey's mother is an award winning TV star. (Marjorie) is a TV and pop star. Shaun Micalleff (Cecilia's father) is an Australian comedian and TV presenter. (Leonard) has had a long Australian career and is remembered for his role in "". (Beth-Ann) used to play Katya Kinski in "." is known in Australia & The UK as teen .

Sara Paxton required two and a half hours to don and remove Aquamarine's tail. The tail was heavy for the actress to wear, weighing over 100 pounds and was around eight feet long. Paxton took a month of swimming lessons beforehand.

Differences From the Book

*In the novel, The Capri Beach Club is condemned to be destroyed. In the film, the Club is considered to be a popular club, whom everyone visits for most of the day.

*In the film, Claire's family owns the Capri Beach Club, in the novel, this isn't so. However Claire, Hailey are the only visitors, and Raymond is the only employee.

*In the film, Raymond is a lifeguard. In the novel, he works at the Snack Shack.

*In the film, Hailey is moving away because of her mother's job as a who received a great honor by moving to and to help with the . In the novel, Claire's family is moving away to to escape the harsh winters.

*In the movie Hailey is moving but in book Claire is.

*In the film, Claire and Hailey live in Baybridge, a suburb of .

*In the film, Aquamarine is able to change her mermaid's tail, into legs. In the novel, however this is impossible. Aquamarine wore a long blue gown adorned with seashells to cover her tail, while sitting in a .

*In the film, Aquamarine has mostly blonde hair with some blue . In the novel, her hair is completely blue.

*In the novel, a mermaid cannot survive being away from the ocean for more than one week. In the film, they can be on land as long as they like, but they have to be in water before sunset.

*In the film, Aquamarine left home because she wanted to marry for love, and prove to her father that love exists. In the novel, Aquamarine just wanted Raymond to love her because she loved him.

*Love in the mermaid's world is never mentioned in the novel.

*In the film, "If you help a mermaid, you get a wish." This is never said in the book.

*In the novel, Leonard is nonexistent.

*In the novel, Cecilia is nonexistent.

* In the movie, when Aquamarine says crab, she means crap. Also when she says bullshark in the movie, she meant bullshit. 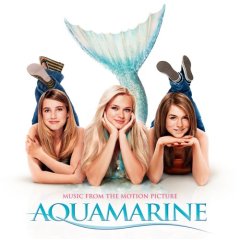 The soundtrack was released on , .

* "Aquamarine" was mildly successful. The film grossed $18.6 million at the box office and a total of $22.9 million worldwide. Additionally the film has grossed 42 million dollars in DVD rentals and DVD sales. The budget was $12 million.