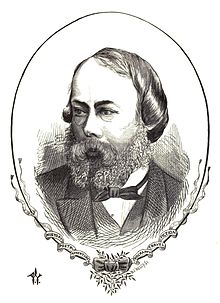 Charles Edward Mudie (Chelsea, October 18, 1818 – October 28, 1890), English publisher and founder of Mudie's Lending Library and Mudie’s Subscription Library, was the son of a second-hand bookseller and newsagent. In 1840 he established a stationery and book-selling business in Bloomsbury. He was the first publisher of James Russell Lowell's poems in England, and of Emerson's Man Thinking.

In 1842 he began to lend books to students at the University of London, charging subscribers one guinea per year for the right to borrow one volume of a novel at a time. This proved so successful that in 1852 he moved his "Select Library" to larger premises at 509, 510 & 511 New Oxford Street, at its junction with Museum Street and Hart Street, just a few yards south of the British Museum. London.[1] As a side-note, Mudie's Library is mentioned in the H.G.Wells classic, The Invisible Man. Chapter 21 : In Oxford Street. "We crawled past Mudie's, and there a tall woman with five or six yellow-labelled books hailed my cab, and I sprang out just in time to escape her, shaving a railway van narrowly in my flight. I made off up the roadway to Bloomsbury Square, intending to strike north past the Museum and so get into the quiet district." 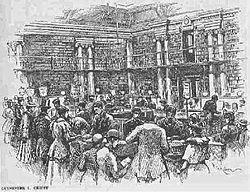 Mudies soon had outlets on Cross Street in Manchester and on New Street in Birmingham. They also exported books using watertight boxes some of which were reported to have survived shipwreck.

He was able to offer publishers advance purchase of three or four hundred copies of their new books and was obtaining corresponding discounts. Mudies withdrawn books were offered for sale at £5 for a hundred volumes in 1860.[1]

The cost of novels in the Victorian era was such that most middle-class English people could not afford to purchase novels privately, so lending libraries like "Mudie's" had a strong influence over publishers and authors. The rise of the three-volume novel can be directly attributed to this influence, and Mudie's refusal to stock "immoral" books, such as, George Moore's A Modern Lover (1883), A Mummers Wife (1885) and A Drama in Muslin (1886), also had an effect on the direction of Victorian literature.

Mudie was also crucial in the success of scientific volumes – In November 1859 he bought 500 copies of the first publication of Charles Darwin's On the Origin of Species.[2]

In 1860 the company's New Oxford Street premises were substantially enlarged, and new branches of the business were subsequently established in other English cities such as York, Manchester and Birmingham. In 1864 Mudie's was converted into a limited company. The decline of Mudie's eventually came as a result of the rising number of government-funded public libraries, which offered similar services at a much reduced rate. 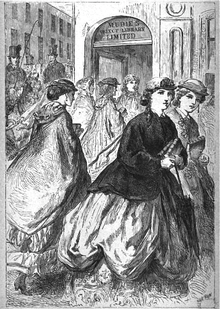