It was formerly known as Sugar Land Municipal Airport, or Hull Field. The airport was purchased from a private interest in 1990 by the city of Sugar Land. As of 2009 it is the fourth-largest airport within the Houston–Sugar Land–Baytown metropolitan area and handles approximately 250 aircraft operations per day.

The City of Houston maintains Cullinan Park, which occupies 750 acres (300 ha) of land directly north and west of the Sugar Land Regional Airport, blocking possibilities for expansion. In addition the airport is surrounded by Sugar Land homes, and there is a highway and rail road track directly south of the airport—all factors that block airport expansion. The former Central Unit, a Texas Department of Criminal Justice prison for males, is in land zoned for airport expansion.[6]

Donald Hull, an oral surgeon that established a dental program for the Texas Department of Corrections in the early 1950s. Hull, who commuted across Southeast Texas to provide dental care to prisoners, originally operated aircraft to South Houston Airport and Sam Houston Airport. The City of Houston forced those airports to close. Hull decided to develop an airport that would not be closed. In 1952 Hull landed his biplane in a field near Sugar Land. Afterwards, with a loan from a friend, Hull purchased the field.[7] In 1985 the airport saw service to Houston Intercontinental through Metro Airlines, operating as Eastern Airlines Express.[8]

The City of Sugar Land purchased Hull Field on December 18, 1990 and renamed the airport "Sugar Land Municipal Airport."[7] The City of Sugar Land opened an NFCT (non-federal control tower) that it funds and operates. This control tower manages traffic within 4 miles (6 km) of Sugar Land Airport from 6:00 a.m. to 10:00 p.m. daily.[2] From the northern hemisphere summer of 1993 to early 1995,[7] Sugar Land Regional Airport handled commercial passenger service during the mid-1990s for a now-defunct Texas carrier known as Conquest Airlines. Conquest offered commercial flights from the airport to Austin, Dallas, and San Antonio.[9] The airline closed after financial difficulties occurred. The airport received its current name in October 2002.[7] 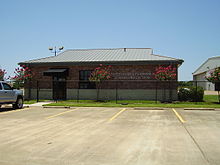 U.S. Customs and Border Protection at the airport