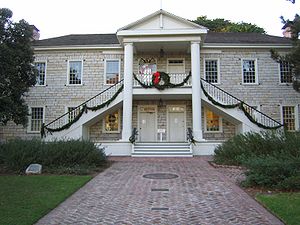 Colton Hall in Monterey, site of the 1849 Constitutional Convention

The document that establishes and describes the duties, powers, structure and function of the government of the U.S. state of California. The original constitution, adopted in November 1849 in advance of California attaining U.S. statehood in 1850, was superseded by the current constitution, which was ratified on May 7, 1879.[1] The result of Progressive mistrust of elected officials, the 1879 constitution is the third longest in the world (behind the constitutions of Alabama and of India),[2] and has been described as "the perfect example of what a constitution ought not to be".[3]

The constitution has undergone numerous changes since its original drafting. It was rewritten from scratch several times prior to the drafting of the current 1879 constitution, which has itself been amended or revised (see below).[citation needed]

In response to widespread public disgust with the powerful railroads which controlled California's politics and economy at the start of the 20th century, Progressive Era politicians pioneered the concept of aggressively amending the state constitution by initiative in order to remedy perceived evils.[4] From 1911, the height of the U.S. Progressive Era, to 1986, the California Constitution was amended or revised over 500 times.[5] The constitution gradually became increasingly bloated, leading to abortive efforts towards a third constitutional convention in 1897, 1914, 1919, 1930, 1934 and 1947.[6] By 1962 the constitution had grown to 75,000 words, which at that time was longer than any other state constitution but Louisiana's.[7] That year, the electorate approved the creation of a California Constitution Revision Commission, which worked on a comprehensive revision of the constitution from 1964 to 1976. The electorate ratified the Commission's revisions in 1966, 1970, 1972, and 1974, but rejected the 1968 revision, whose primary substantive effect would have been to make the state's superintendent of schools into an appointed rather than an elected official.[8] The Commission ultimately removed about 40,000 words from the constitution.[7] Repair California sought to qualify two initiatives on the 2010 statewide ballot which would have called for another, limited, constitutional convention, but this effort failed due to a lack of funding.[citation needed]

Signatories of the original 1849 Constitution

Many of the signatories to the state's original 1849 constitution were themselves prominent in their own right, and are therefore listed below. The list is notable for the inclusion of several Californios (early Californians of European, African and Native American mix).

In contrast to the inclusive 1849 convention, the 1879 constitutional convention was heavily dominated by recent immigrants from Europe, as well as migrants from southern and central states. As a result, both the atmosphere of the convention and the tenor of the document it produced were far more expressly racist against persons not of Western or Northern European descent. It would take nearly a century to purge the racism out of the state constitution.

Differences from other constitutions

The California Constitution is one of the longest in the world.[2] The length has been attributed to a variety of factors, such as influence of previous Mexican civil law, lack of faith in elected officials and the fact that many initiatives take the form of a constitutional amendment.[9] Several amendments involved the authorization of the creation of state government agencies, including the State Compensation Insurance Fund and the State Bar of California; the purpose of such amendments was to insulate the agencies from being attacked as an unconstitutionally broad exercise of police power or inherent judicial power.[10]

Unlike other state constitutions, the California Constitution strongly protects the corporate existence of cities and counties and grants them broad plenary home rule powers.[11] By specifically enabling cities to pay counties to perform governmental functions for them, Section 8 of Article XI resulted in the rise of the contract city.[12]

Article 4, section 8(d) defines an "urgency statute" as one "necessary for immediate preservation of the public peace, health, or safety"; any proposed bill including such a provision includes a "statement of facts constituting the necessity" and a two-thirds majority of each house is required to also separately pass the bill's urgency section.[13]

Many of the individual rights clauses in the state constitution have been construed as providing rights broader than the Bill of Rights in the federal constitution.[14] Two excellent examples include (1) the Pruneyard Shopping Center v. Robins case involving an implied right to free speech in private shopping centers, and (2) the first decision in America in 1972 which found the death penalty unconstitutional, California v. Anderson, 6 Cal. 3d 628. This noted that under California's state constitution a stronger protection applies than under the U.S. Constitution's 8th Amendment; the former prohibits punishments that are "cruel or unusual", while the latter only prohibits punishments that are "cruel and unusual".

Two universities are expressly mentioned in the constitution: the University of California and Stanford University. UC is one of only nine state-run public universities in the United States whose independence from political interference is expressly guaranteed by the state constitution.[15] Since 1900, Stanford has enjoyed the benefit of a constitutional clause shielding Stanford-owned property from taxes as long as it is used for educational purposes.[16]

The constitution of California distinguishes between constitutional amendments and revisions, the latter of which is considered to be a "substantial change to the entire constitution, rather than ... a less extensive change in one or more of its provisions".[17] Both require passage of a California ballot proposition by voters, but they differ in how they may be proposed. An amendment may be placed on the ballot by either a two-thirds vote in the California State Legislature or signatures equal to 8% of the votes cast in the last gubernatorial election, among the lowest thresholds for similar measures of any U.S. state.[18] As of 2008[update], this was 694,354 signatures[19] compared to an estimated 2007 population of 36,553,215.[20] Revisions originally required a constitutional convention but today may be passed with the approval of both two-thirds of the legislature and a majority of voters; while simplified since its beginnings, the revision process is considered more politically charged and difficult to successfully pass than an amendment.[21]

The exact distinction between an amendment and a revision has never been clear, as highlighted by Proposition 8 in 2008.[citation needed] Passed as an initiative amendment in response to the California Supreme Court's finding that same-sex marriage was allowed under the constitution, the proposition defined marriage as between a man and a woman. Opponents argued that Proposition 8 constituted a revision, and was thus beyond the scope of the initiative process. However, the California Supreme Court eventually ruled that it was in fact an amendment, and within the rights of the voters to add to the constitution.