The Howard Athenæum (1845-1953) in Boston, Massachusetts, was one of the most famous theaters in Boston history. Founded in 1845, it remained an institution of culture and learning for most of its years, finally closing in 1953. 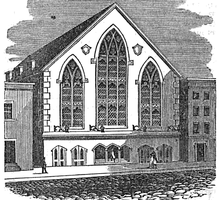 Of all the theaters founded in Boston, the Howard Athenæum was one of the most famous as well as the most lamented. Popular throughout New England, the theater was affectionately called "The Old Howard." Built in 1843 as a church by the Millerite sect, the flimsy tent-like structure housed a small but loyal congregation who eventually abandoned the site following disappointment with the minister's promise that the world would end in 1844. After Armageddon failed to materialize, the founder of the sect, William Miller, an ex-Deputy Sheriff from Poultney, Vermont, was discredited and the Millerites moved on. The temple was then rebuilt as a playhouse in 1845, only to burn to the ground a few months later. In 1846 a new structure was designed by Isaiah Rogers[1] in a Gothic-like style that was unique among American theaters. The new building, made of Quincy granite and capable of seating 1,360 patrons, was rushed to completion with the aid of funds from a local brewery. It reopened October 5, 1846, at 34 Howard Street in Scollay Square, the area that is now occupied by Boston's Government Center. 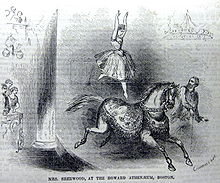 Mrs. Sherwood at the Howard Athenaeum, 1854.

For the first several decades of its existence, it successfully vied with the Boston Museum as that city's leading playhouse. While the Boston Museum relied heavily on its great stock company, the Howard became the home of leading touring actors. In an 1860 playbill, the Howard Athenaeum proudly announced that it hosted performances of "opera, tragedy, comedy, burlesque, vaudeville, minstrels, and magicians." Among the great names regularly appearing at the Howard were Edwin Booth, Charlotte Cushman and other stellar performers of that era, including a young John Wilkes Booth, who played Hamlet. The playhouse soon became famous for its opera productions: Verdi's Ernani, which had its American premier at the Howard in 1847, may have been Boston's first exposure to Italian bel canto opera. A program for the Ernani performance at the Howard is owned by the Boston Athenæum, which has a very small but interesting collection of programs from the Howard's early years dating from 1847 to 1848.

Ballet, opera and serious drama would be the main fare at the Howard for the next twenty years and, on that first night, the Howard Athenaeum opened with a production of Richard Sheridan's The School for Scandal. For the first four months of its life, the Howard seemed to enjoy a blessed existence, until on February 25, 1846, during a performance of Pizzaro, a ball of fire representing the sun set the scenery on fire and the building burned to the ground. However, the theatre reopened on October 5, 1846 with Richard Sheridan's The Rivals.

During its early period, the Howard Athenaeum played host to many performing superstars, among them was the eminent comedian, William Warren, who was for years considered the top comedian in the nation. Scandal also surfaced when, on May 4, 1853, the Howard Athenaeum found itself under unfavorable national scrutiny. Sarah Parker Remond, a medical doctor, anti-slavery activist and lecturer with the American Anti-Slavery Society, had bought a ticket through the mail for the Donizetti opera, Don Pasquale, but, upon arriving, refused to sit in a segregated section for the show. She was forcibly removed and pushed down a flight of stairs. She eventually won a desegregation lawsuit against the managers of the Howard Athenaeum and received $500 in a settlement.

By the late 1860s, however, the theater had lost much of its audience to its more popular rivals— the Boston Museum and the Boston Theatre— and had begun presenting variety shows. In 1869, The Howard Athenaeum introduced an era of vaudeville with "Lydia Thomson and Her British Blondes.", By the end of the 19th century, the theatre had completely switched over to burlesque with performers such as Ann Corio, Sally Rand, Fanny Brice, Gypsy Rose Lee, Sophie Tucker and "Tillie the Tassel." From its fashionable grand opera days in the mid-nineteenth century, the Old Howard had become a tawdry establishment especially beloved by Harvard undergraduates for its strip-tease acts. President Kennedy was allegedly a regular patron of the Old Howard in his Harvard days (The Harvard class of 1937 even made Ann Corio an honorary member.) The Boston Phoenix for February 17, 2007, said: "...the Howard hosted everyone in show biz from John Wilkes Booth to Phil Silvers to Minsky’s Burlesque star Ann Corio to an “exotic Indian dancer” named Princess Lahoma." Plus a few vice raids. [2] The list becomes even longer when you add these Howard alumni: Abbott & Costello, Jimmy Durante, Fred Allen, W. C. Fields, Jackie Gleason, Al Jolson, Buster Keaton, Bert Lahr and Jerry Lewis. And, even more unbelievable, boxers John L. Sullivan and Rocky Marciano gave boxing demonstrations on the stage. During this exciting era of burlesque and variety, the Howard would advertise: "There is always Something Doing at the Old Howard."[3] [4]

After the show was over

As the burlesque performances got more risqué with each year, the Boston vice squad made the Old Howard the object of their attention. The Boston Vice squad made a 16mm film during one of their raids in 1953 and captured on film the performance of "Irma the Body" (real name: Mary Goodneighbor). This film footage resulted in an indecency hearing which eventually led to the closing of the Old Howard in 1953.

Due to the indecency charges, the city of Boston refused to renew the Old Howard's license in 1953, so the auditorium was dark for nearly a decade. In 1960 the Howard National Theatre and Museum Committee was formed to raise $1,500,000 to refurbish “Boston's most celebrated theatre” and restore it to the legitimate fold. However, before the committee could realize its ambition, the building had a small but not devastating fire. Though many people supported the push for a complete renovation, the city tore the building down promptly after the fire before anybody could protest. This controversial incident occurred at the height of Boston's urban renewal initiative and not much was considered historic except colonial-era structures.

Chronology of performances and events at the Howard Athenaeum

Actors and actresses who began their careers at the Howard Athenaeum

Fanny Davenport (1850-1898) was an American stage actress. The daughter of Edward Loomis Davenport and Fanny Vining, she was born in London, England, but was brought to America when a child and educated in the Boston public schools. When seven years old she appeared at the Howard Athenæum in Boston, as the child of Metamora.

Barney Fagan (born in Boston, MA, January 12, 1850—died 1937) made his first professional appearance in his native city of Boston at the famous Howard Athenaeum in 1860, as the Cabin Boy in the "Pilot of Brest." He remained at this theatre several seasons until 1865 when he played his first minstrel engagement with the Morris Brothers in Boston. In 1870 Mr. Fagan went to St. Johns, New Brunswick, Canada, and appeared with Pete Lee’s Minstrels. In 1873 he joined Buckley’s Serenaders in Boston, and took a fellow dancer, Joe Parks, as a partner. During the period 1873-1876, Fagan and Parks, known as the American Lads, played variety engagements. In 1876 he did the famous Heifer dance with Richard Golden in Evangeline. Mr. Fagan next joined John Fenton in a dancing specialty, and continued with him until 1878, when he formed a partnership with Lizzie Mulvey, which lasted one season.

Nathaniel Carl Goodwin (July 25, 1857 – January 31, 1919) was an American actor and vaudevillian born in Boston. While clerk in a large shop he studied for the stage and made his first appearance in 1874 at the Howard Athenaeum in Boston in Stuart Robson's company as the newsboy in Joseph Bradford's Law in New York. The next year he appeared at Tony Pastor's Opera House in New York City where he began his career as a vaudevillian.

William Edward Sheridan (Jun. 1, 1837 - May 18, 1887), born in Boston, where he made his debut at the Howard Athenaeum in 1858, he became a leading portrayer of villains and tragic figures in Cincinnati until the outbreak of the Civil War. After the war, despite a badly injured arm, he continued to be an important actor, his notable roles including Othello, Shylock, and Sir Giles Overreach. Sheridan also was the first American Beamish McCloud in Arrah na Pogue (1865). Following a long San Francisco engagement, he left for a tour of Australia, where he died. Otis Skinner remembered the virile actor with dark, deep set eyes as a man of splendid power, with one of the most intriguing voices I ever listened to. Others remarked on his voice's striking resonance. [8]

Henry Denman Thompson (1833-?) For three generations his ancestors had been born and lived in Swanzey New Hampshire. In 1847 when he was fourteen years old, he returned with his family to Swanzey, New Hampshire, the town which became the inspiration for writing his famous play, "The Old Homestead." While living there in Swanzey, Denman attended the Mount Caesar Seminary (now the Mount Caesar Union Library). His first appearance on the stage was at the Howard Athenaeum, Boston (1850) where he acted as a "supe" for Charlotte Cushman in "Lady Macbeth." [9]