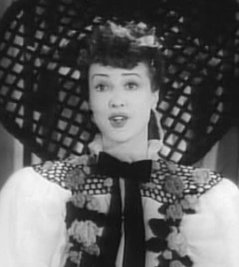 Gypsy Rose Lee (also known as Rose Louise Hovick and Louise Hovick) (born [ [http://www.historylink.org/essays/output.cfm?file_id=5686 Historylink.org] ] &ndash; ) was an American actress, entertainer and writer whose 1957 memoir, written as a monument to her mother, was made into the stage musical and film "".

Gypsy was born as Rose Louise Hovick in in 1911, although her mother later shaved three years off both of her daughters' ages. She was initially known by her middle name, Louise. Her mother, , married John Olaf Hovick, who was a newspaper advertising salesman. Her sister, Ellen June Hovick (better known as actress ), was born in 1913.

After their parents divorced, the girls earned the family's money by appearing in where June's talent shone while Louise remained in the background. At the age of 13, June married a boy in the act named Bobby Reed, whom Mama Rose had arrested and met at the police station with a hidden gun. She pulled the trigger but the safety was on and Bobby was freed. June left the act and went on to a brief career in before giving birth to April Reed around 1930.

Louise's singing and dancing talents were insufficient to sustain the act without June. Eventually, it became apparent that Louise could make money in burlesque, which earned her legendary status. Her innovations were an almost casual strip style, compared to the herky-jerky styles of most burlesque strippers (she emphasized the "tease" in "striptease") and she brought a sharp sense of humor into her act as well. She became as famous for her onstage wit as for her strip style, and&mdash;changing her stage name to Gypsy Rose Lee&mdash;she became one of the biggest stars of , where she performed for four years. She was frequently arrested in raids on the Minsky brothers' shows.

She eventually traveled to , where she was billed as Louise Hovick. Her acting was generally panned, so she returned to and invested in film producer Michael Todd (1909-1958). She eventually appeared as an actress in many of his films.

Trying to describe what Gypsy was (a "high-class" ), coined the term "". Her style of intellectual recitation while stripping was spoofed in the number "Zip!" from Rodgers and Hart's "Pal Joey", a play in which her sister June appeared. Gypsy can be seen performing an abbreviated version of her act (intellectual recitation and all) in the 1943 film "".

In 1941, Gypsy Rose Lee authored a mystery thriller called "" which was made into the 1943 film "" starring . While some assert this was in fact ghost-written by Craig Rice, there are also those who suggest that there is more than sufficient written evidence in the form of manuscripts and Lee's own correspondence to prove she wrote a large part of the novel herself under the guidance of Rice and others, including her friend and mentor, the editor George Davis. [Tippins, Sherill. "February House: The Story of W. H. Auden, Carson McCullers, Jane and Paul Bowles, Benjamin Britten, and Gypsy Rose Lee, Under One Roof in Brooklyn. Houghton Mifflin Company Publishing, 2005."] [Hubin, Allen J. "Crime Fiction, 1749-1980: A Comprehensive Bibliography. New York: Garland Publishing Inc., 1984, p. 243] Lee's second murder mystery, "", was published in 1942.

While she worked at Minsky's, Gypsy Rose Lee had relationships with an assortment of characters from comedian to . In Hollywood, she married Arnold "Bob" Mizzy on , at the insistence of the film studio. Gypsy was at one time in love with Michael Todd, and in 1942 in an attempt to make him jealous, she married William Alexander Kirkland. They divorced in 1944. While married to Kirkland, she gave birth to a son fathered by ; he was named Erik Lee and has been known successively as Erik Kirkland, Erik de Diego and . Gypsy Lee was married for a third time in 1948 to Julio de Diego, but they also eventually divorced. She also had a public affair with writer .

Gypsy and June, who also became successful in performance, continued to get demands for money from their mother, who had opened a in a ten-room apartment on West End Avenue in . This property and a farm in , had been rented for Mother Rose by Gypsy Lee. Mother Rose shot and killed one of her guests (according to , she killed her own lover, who had made a pass at Gypsy) at the boardinghouse. This incident was explained as a . As Mother Rose was dying of colon cancer, her final words, in 1954, were for Gypsy Lee: "Wherever you go... I'll be right there. When you get your own private kick in the ass, just remember: it's a present from me to you."

With their mother dead, the sisters now felt free to write about her without risking a lawsuit. Gypsy's memoirs, titled "Gypsy", were published in 1957 and were taken as inspirational material for the , , and musical "". June Havoc didn't like the way she was portrayed in the piece, but she was eventually persuaded (and paid) not to oppose it for her sister's sake. The play and the subsequent movie deal assured Gypsy a steady income. The sisters became estranged. June, in turn, wrote "Early Havoc" and "More Havoc", relating her version of the story.

Gypsy Rose Lee went on to host a morning San Francisco television talk show, "Gypsy". She was diagnosed in 1969 with metastatic , which prompted her to reconcile with June before her death. "This is my present, you know," she reportedly told June, "my present from Mother".

The walls of her Los Angeles home were adorned with pictures by , , , and , all of which were reportedly gifts to her by the artists themselves. Like Picasso, she was a supporter of the movement in the and raised money for charity to alleviate the suffering of Spanish children during the conflict.