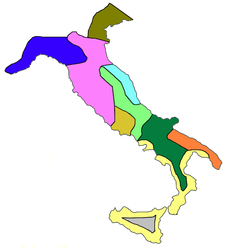 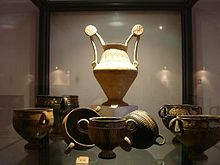 The Messapii were an ancient tribe that inhabited, in historical times, the south-eastern peninsula or "heel" of Italy (Salento, modern Apulia), known variously in ancient times as Calabria, Messapia and Iapygia. Their chief towns were Uzentum (modern Ugento), Rudiae (modern Lecce), Brundisium (modern Brindisi) and Hyria. They spoke the Messapian language. They are often referred to as "the most southerly of the Iapygian tribes".

The true origin of the Messapii is debated. The most credited theory is that they came from Illyria.

After Hyria (founded probably in the 18th century BC) they founded other towns, which, at a much later time, the Tarentines attempted to take. The Iapygians repulsed the Tarentine Greeks however and inflicted a serious defeat on them in 473 BC[1], thanks to their superior cavalry. The Messapic cities were independent from each other, and had trade relationships with Greater Greece communities. A corps of Messapic archers fought with Athenians in a war against Syracuse.

The Messapians were later conquered by the Romans and absorbed into the Latin-speaking and Greek-speaking populace.

The Messapii spoke the Messapian language, a centum language belonging to its own branch of Indo-European, though possibly on the same branch as the Illyrian languages spoken across the Adriatic in its time. Messapian (or Iapygian) was also spoken by other Iapygian tribes. The Messapii were familiar with literacy, and adapted the Ionic/Tarentine Greek alphabet to write their own language, recorded in some fifty inscriptions, only partially and indefinitely deciphered thus far.

The language became extinct as its speakers adopted Latin, though some may have adopted Greek.

Other Messapic settlements have been discovered near Francavilla Fontana, San Vito dei Normanni and in Vaste (Poggiardo).