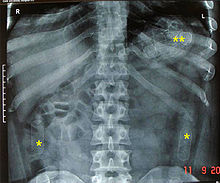 Plain radiograph of the abdomen of a "mule"

A mule or courier is someone who smuggles something with him or her (as opposed to sending by mail, etc.) across a national border, including bringing in to and out of an international plane, especially a small amount, transported for a smuggling organization. The organizers employ mules to reduce the risk of getting caught themselves, while often profiting most. The mule typically gets paid an amount which is small compared with the profit, but large for somebody with little money, so that it seems to him or her like an easy way to make money.

Sometimes the goods are hidden in e.g. the bag or vehicle of an innocent person, who does not know about this, for the purpose of retrieving the goods elsewhere.

In the case of transporting illegal drugs, the term drug mule applies. Kinder Surprise and Easter Egg are both common slang terms for drug mules.

Methods of smuggling include hiding the goods in a vehicle, luggage or clothes, strapping them to one's body, or using the body as container.

The latter is mainly applied for heroin and cocaine, and sometimes for ecstasy.[1] It is often done by swallowing latex balloons (often condoms, or fingers of latex gloves) or special pellets[clarification needed] filled with the goods, and recovering them from the feces later (such a smuggler is called a swallower or internal carrier; the practice is also called body packing or body stuffing). It is a common, but medically dangerous way of smuggling small amounts of drugs: a mule can die if a packet bursts or leaks before exiting the body. Other methods of carrying drugs within the body include insertion of the package directly into the anus or vagina. This method is obviously far more vulnerable to body cavity searches.

People are sometimes X-rayed at airports etc. to check for drug pellets.

With regard to traffic from South America to the US, the US Drug Enforcement Administration reports: "Unlike cocaine, heroin is often smuggled by people who swallow large numbers of small capsules (50–90), allowing them to transport up to 1.5 kilograms of heroin per courier."[2] However, elsewhere cocaine is smuggled this way.

In 2003, over 50% of foreign females in UK jails were drug mules from Jamaica.[3] Nigerian women also make a large contribution to the remaining figure[citation needed].

In all, around 18% of the UK's female jail population are foreigners, 60% of which are serving sentences for drug related offences–most of them drug mules.[4]

Abu Nayeem, arrested in October 2004, claimed to be an unwitting drug mule. He was allegedly carrying 10 balloons containing pure cocaine. The Bali Nine are an example of a drug-smuggling ring.

Routine detection of the smuggled packets is extremely difficult, and many cases come to light because a packet has ruptured or because of intestinal obstruction. Unruptured packets may sometimes be detected by rectal or vaginal examination, but the only reliable way is by X-ray of the abdomen. Hashish appears denser than stool, cocaine is approximately the same density as stool, while heroin looks like air.[5]

In most cases, it is only necessary to wait for the packets to pass normally, but if a packet ruptures or if there is intestinal obstruction, then it may be necessary to operate and remove the packets surgically.[6] Oil-based laxatives should never be used, as they can weaken the latex of condoms and cause packets to rupture.[7] Emetics like syrup of ipecac, enemas, and endoscopic retrieval all carry a risk of packet rupture and should not be used.[8] Repeat imaging is only necessary if the mule does not know the packet count.

Ruptured packets often require treatment as for a drug overdose and may require admission to an intensive care unit. Body packers are not always reliable sources of information about the contents of the packages (either because of fears about information being passed on to law enforcement agencies or because the mule genuinely does not know) and urine toxicology may be necessary to determine what drugs are being carried and therefore what antidotes are needed.[6]

Drug smuggling by a mule was the topic of: