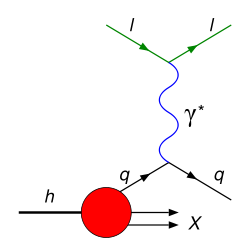 Deep inelastic scattering of a lepton on a hadron, at leading order in perturbative expansion.

Deep inelastic scattering is the name given to a process used to probe the insides of hadrons (particularly the baryons, such as protons and neutrons), using electrons, muons and neutrinos. It provided the first convincing evidence of the reality of quarks, which up until that point had been considered by many to be a purely mathematical phenomenon. It is a relatively new process, first attempted in the 1960s and 1970s. It is an extension of Rutherford scattering to much higher energies of the scattering particle and thus to much smaller resolution of the components of the nuclei. [1]

The Standard Model of physics, particularly given the work of Murray Gell-Mann in the 1960s, had been successful in uniting much of the previously disparate concepts in particle physics into one, relatively straightforward, scheme. In essence, there were three types of particles.

The leptons had been detected since 1897, when J. J. Thomson had shown that electric current is a flow of electrons. Some bosons were being routinely detected, although the W+, W- and Z0 particles of the electroweak force were only categorically seen in the early 1980s, and gluons were only firmly pinned down at DESY in Hamburg at about the same time. Quarks, however, were still elusive.