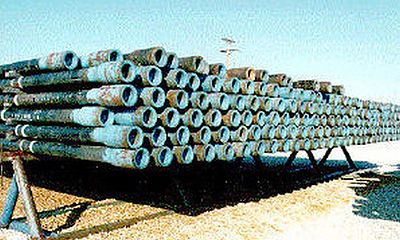 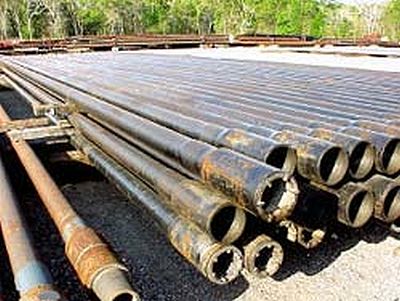 Drill pipe, is hollow, thick-walled, steel piping that is used on drilling rigs to facilitate the drilling of a wellbore and comes in a variety of sizes, strengths, and weights but are typically 30 to 33 feet in length. They are hollow to allow drilling fluid to be pumped through them, down the hole, and back up the annulus.

Because it is designed to support its own weight for combined lengths that often exceed 1 mile down into the Earth's crust, the case-hardened steel tubes are expensive, and owners spend considerable efforts to reuse them after finishing a well, replacing the drill stems with thinner walled tubular casing, tapping the natural resources of oil reservoirs. Used drill stem is often sent to a yard for inspection, sorted, and stored until new drill sites can be explored. Modified instruments similar to the spherometer are used at inspection sites to identify defects in the metallurgy, in order to prevent fracture of the drill stem during future wellboring.

See Drilling rig (petroleum) for a diagram of a drilling rig.