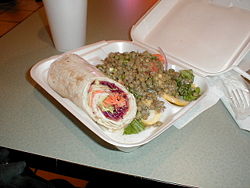 A wrap is a sort of sandwich made of a soft flatbread rolled around a filling. The usual flatbreads are wheat-flour tortillas, lavash, or pita; the filling usually consists of cold sliced meat, poultry, or fish accompanied by shredded lettuce, diced tomato or pico de gallo, guacamole, sauteed mushrooms, bacon, grilled onions, cheese, and a sauce, such as ranch or honey mustard.

The wrap probably comes from California, as a generalization of the Tex-Mex burrito, and became popular in the 1990s.[1] It may have been invented and named at a southern California chain called "I Love Juicy" in the early 1980s.[2][3] The Bobby Valentine Sports Gallery Cafe in Stamford, Connecticut is sometimes claimed to have invented the wrap at about the same time, but Valentine himself is rather diffident about it: "Well, that's legend and folklore, but until somebody disputes me or comes up with a better story, I'll say I invented the wrap." Beth Dolan of Stamford, Connecticut is the waitress credited for serving the first wrap after the restaurant had ran out of bread. Moreover, Valentine's own story dates his use of the name 'wrap' to the mid-1990's, after it is documented in California.[4]

A wrap and a sandwich are different. A sandwich has two distinct layers[citation needed], which are the top and bottom buns or pieces of bread. A wrap, on the other hand, is one piece that completely surrounds the content of the wrap.

Restaurants such as Camille's Sidewalk Cafe, Sonic Drive-In, Jason's Deli, Buffalo Wild Wings, Subway, Chick-fil-A, and McAlister's Deli serve wraps. KFC now serves its chicken in a wrap as menu choice, with lettuce, mayonnaise and salsa. McDonald's has recently introduced a snack wrap, with a fried chicken strip, lettuce, Cheddar, and ranch dressing. Smokey Bones Barbeque and Grill has recently introduced a Portobello Chicken Wrap to broaden their selection of grilled menu items. Wraps are also very popular in Australia and New Zealand[citation needed] with chains such as Oporto and Burger Fuel amongst others serving them.

The UK wrap market has grown substantially since 2004 with all major sandwich and fast food stores now selling wraps.